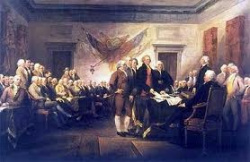 Americans are quick to forget (or embarrassed to remenber) that during The War of Independence, whole cities remained loyal to the British Crown.  "Murrain" is (literally) a disease of livestock but came to mean a more general malady, as might "pox" these days.

They fled from the murrain that fell on East Ham

By Plymouth and Boston they brought us

And on to this place they called New Amsterdam

To sire we grandsons and daughters.

We’re sons of our forefathers, sons of this land

Not Albion’s enemy with whom they stand –

Their allies, the French and the Spanish.

They pressed us to fight against kith and our kin

But what would have victory bought us?

A cheap independence so pyrrhic and thin

And the blood of those brothers who fought us.

But whether his crown be of gold or of thorn

Or whether his crown be of laurel

As subjects of his in America-born

With country or King we’ve no quarrel.

So damn all the rebels of Washington’s crew

Who sit in that treacherous caucus

They may speak for Boston and Baltimore too

Not sure I follow the line of argument about “Remain”, MC.
Equally I am not sure I would be able to persuade a New York cabbie about the Loyalist provenance of his City. Sometimes you have to recognise that the Myth is more alluring than the Truth.

Just down the road is a plaque attached to a wall - marking the address as that of a certain Benedict Arnold - hero to the Brits. of his
day and a traitor in American eyes. The actions that led to the War
of Independence may be said to have been driven and fuelled by
commercial interests, especially traders who took issue with the
always contentious (then and now!) question of taxation. Perhaps
they should have had a referendum - or again, perhaps not! ?
There is a curious analogy in the connection between today's
"Remainers" with their allegiance to foreign allies and those who
took the position of subordinating their allegiance to the Crown to
others (in Europe...where else?)) who they saw as allies to their aims back then. JC - you make the point about the
treatment of Indian inhabitants by the
British...and it was later highlighted by
the faith of those surviving native
Americans who sought refuge in Canada
- under the protection of The Great White
Mother: Queen Victoria - as the Indian Wars of the late 19th century drew to a close in the USA.

Thanks, Rachel. I’ll follow up that documentary link.
The living proof of the division of loyalty among the Americans is Canada, Loyalist America.
Little known is the fact that the iconised George Washington was a general in the British army and that, far from the popular myth that the insurgents defeated Britain with local know-how and guerilla tactics, the British were assisted by native Indians with local knowledge every bit as comprehensive as the rebels and who saw they got better treatment and deals from the British. Also weaponry made hit and run guerilla warfare less effective; they weren’t accurate.
But who am I to argue with Mel Gibson and the box office?

"History is written by the victors", "ignorance is bliss", and all that--there's quite a lot of history they're loath to teach in the public school system.

The entire series is a great watch, but you may find the first two episodes especially interesting.

PS
Sadly, the link is no longer available. This might give you an idea, though...

Good one John showing your serious side.