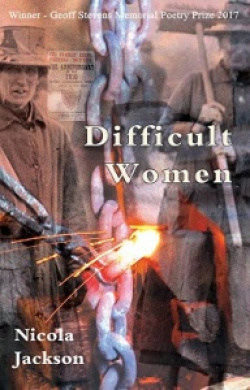 The absorbing poetry of Nicola Jackson in this collection, which jointly won the 2017 Geoff Stevens Memorial Prize, grips the reader’s attention with its strong commitment to the feminist cause and the exposure of women’s exploitation during the industrial revolution. Her relentless description of the condition of the ‘White Slaves of England’ working in the factories and mills of the Black Country is expressed in stark powerful images and distinctive dramatic rhythm.

The ‘Chainmakers’ poems reveal the cruel treatment the workers had to undergo, in effective lines where the sounds evoke the atmosphere and create the scene:

It’s the brewus I works in, out the back. Roar up heat,

It roasts our innards, blasts our hot breath thin.

And the ring of it, the slam of the hammer, the clang

that cleaves my head at night, the red mist, the times

I’m reeling as the sun droops and the dark digs in.

It is a list of impressions that involves all the senses in a pressing rhythm conveying the harshness of the workers’ state. Their pain is almost unbearable both at physical and mental level and reduces men and women to flesh that acts automatically without thinking. They are bound to “Dog chain, cart chain, cow-ties, cables, graves.” (‘How It Is’) It is a “sacrifice” that produces profit for one side and early death for the other.

Exploitation provokes protest and anger which are communicated by the striking and skilful use of alliterations and repetitions. This effective technique is also developed in poems such as ‘Walk in the Wood’ and ‘On Shingle Beach’:

… I am the strange feeling

stepping up this grass, the start of questions,

the uncertainty of sharp smoke, the tang of lead

in the twisted bucket, the sharp lack of leather, the skip

of a deer scut, a reddened kite in the deer lick.

There is darkness in these seven trees made of their own

shade. There is pale precarious leaf-fall.

The poet merges with nature, which is spoiled and polluted by mankind. She is on its side mourning and revealing nature’s wounds which become her own wounds. They are marks provoking pain inside and outside, similar to the burns and blisters on workers’ hands.

‘On Shingle Beach’ is an experimental poem in its original use of line breaks and enjambments:

The sounds create the scene stimulating the senses, sketching the landscape in fragmented lines that reflect the poet’s feelings.

The sonnet ‘Burns Night’ is another example of Jackson’s original use of repeated sounds and words. The wording and the rhythm of the interlacing reiterations expose the complexity of a relationship, likely depicting a rape:

To the rocking and the locking as we flew flew flew,

with the thunder of the scalade that was midnight blue.

and I leave to our parting, the wrong from the right.

The final feminist poems call for an awakening to “become links, and link the chain//to something strong” (‘Woke’), where the chain is metaphorically transformed from an instrument of slavery and exploitation to a bond, a “human chain” that connects a woman to another in a common fight for equality and freedom:

… It’s the not asked which gives the taint

if only we can unfurl the gap, seize hold of power

by saying yes we will, today, the strength of being in the chain

of women woke, that says – so what – we like that taint.

Women’s space is boundless, it trespasses the limits, as the poet claims at the end. She might be exposed and vulnerable, but she is also free to observe the limits of man’s world from the outside.