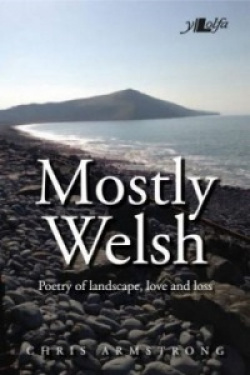 This week sees the publication of Mostly Welsh, a collection of poems by Write Out Loud regular Chris Armstrong. The collection blends the historic with mythological and personal themes and deals with love, loss and his relationship with Wales and Ceredigion.

Chris said that the process of writing the collection began over 15 years ago: “After losing my wife, nearly all of the poems I wrote were focused on her and losing her – things I wished I had expressed while she was still alive, or at least said better, said more or more often. Poetry – both reading and writing – developed into some sort of catharsis or release for me.”

Many of the poems in the book have featured on his Write Out Loud blog. Chris has lived in Wales for most of his life, and moved to the Tregaron area in mid-Wales in 1972. “Wales and the local countryside has been a great influence, as is the sea. The sea is probably the next most important theme [after love and loss] as I have always lived near or on it. It often finds its way into the poems of love as some sort of allegory or symbolisation.”

Chris Armstrong was born in Sussex and has lived in Wales from the age of 10. He spent more than a decade in the merchant navy before working on a Ceredigion farm and then taking a degree which led to 10 years working as a research officer before he set up his own consultancy, research and training company in the information and libraries sector.

Mostly Welsh is published by Y Lolfa and is £6.99

◄ 'A racquet whisked through the air like a wand'

I am drawn to this book as my mother, who was born in Maryport in Cumberland, had a similar attraction to the sea which remained with her until the day she died. She would sit for hours in silence and gaze out to the horizon with a serene expression as if she were already home and content.