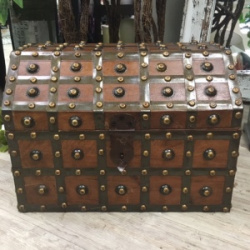 Slowly I start to unpack:

Inside there sits some dusty books

Carefully placed so if someone looks

They will not see what’s underneath

A collection of human teeth

A jar half full of congealed fat

Some boiled sweets in a paper cone

Some dead flowers sharp and brittle

A wax effigy (that disturbs a little)

A walking cane with golden knob

A pocket watch with gilded fob

A bottle of crimson red ink

A round plug from a sink

An old and tarnished bent half crown

A ticket for an east end flop

A doll with it’s head sliced off

A small piece of blackboard chalk

A knife that almost looks home made

With a long sharp and rusty blade

A confession scribed in dripping red

‘From Uncle Jack and all my dead…”

Down At The End Of Lonely Street ►

Heh, still having a whale of time I see ? Nicely done!

Very clever, a couple of lines made me laugh and then it turned very sinister. Loved it.

you have done it again with a poem rich in imagination, well put together, evocative and from that mysterious place above where we all live, yet so close and somewhat distant. Some years ago I assisted a friend in clearing out the loft of the family home, amazed to discover gas masks, newspapers sixty years old, and army great coat and a copy of the Daily Express celebrating the coronation. This poem speaks of the attic, a place of history and treasure.