Down At The End Of Lonely Street 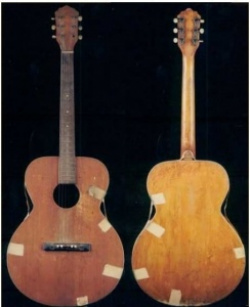 Down At The End Of Lonely Street

Sat in the Tupelo hardware store

Waiting for a buyer to arrive

A price tag hanging from my neck

When a woman and a scrawny kid

Come through the big glass door

Her name is Gladys the proprietor says

And they both look run down poor

Close to his birthday I’m told

He comes across and stares at me

He looks about eleven years old

“I believe you wanted a bicycle

Or a gun” his mother says

But that scrawny kid just shakes his head

On this day of special days

My name is Kay and the salesman

Slips my strap over his head

Adjusts me so the angles are right

And says, as his fingers are spread,

And he takes it from his hand

And makes me speak for the first time

And my voice echoes across the land

His uncle Vester had taught him

Where to place his fingers on the frets

So the boy strums hesitantly

And the salesman says ‘hold all the bets,

This kids gonna be massive

Of that there is no doubt”

And the kid smiles wide and swaggers

as he gets his money out.

He treated me with reverence

And showed my off to all his friends

And I guess you know by now

Just where this story ends

It’s been told a million times

You all know it well

for a room at the Heartbreak Hotel.

◄ From The Attic

Elegy For A Ghost ►

Great poem! No-one else has ever has such a sensual voice as Elvis, not even Sinatra or Bublè.

Great prompt today eh? I love the premise of this.