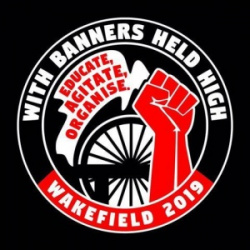 You said that you wanted a land fit for heroes,

but somewhere along the way you forgot

They thought they were fighting for honour and justice,

suppressing the tyrants and saving our land -

but returned to a country that punished the workers

for banding together and making a stand

So your songs are all dirges to the heroically fallen,

your words are all platitudes for their loss of life.

Your actions speak louder than all of your promises,

where lies are pandemic and betrayals are rife

Cause they died in the trenches with promises, hollow,

driving them forward and ringing in their ears

while you pocketed money that should have been spent

making jobs for survivors and easing their fears

Now we march all together and sing for the future,

while honouring those who we lost in the past

and we still want to believe all the promises made

as our young men were slaughtered, dismembered and gassed.

Peace in our times and everlasting hope -

all that they got were more broken dreams,

The bosses got fat on the toil of their workers,

the bankers got fat on their interest rich loans

was treated no better than their graveyards of bones.

So bang the drum comrade and never forget

that if silence is demanded then shout and be loud

and don’t let this government try to sell history

as though it is something for which we should be proud.

A century has passed and they’ve destroyed the mines,

in their self proclaimed, privatised school of hard knocks.

There are still poor people living in poverty,

food banks are prevalent, folk on the street,

they cannot look after the homeless and feeble,

the old cannot pay for their lighting and heat.

From the mud of the trenches they came back home

Their future was as grey as the clothes on their back

They demanded we give them something to cling to

A future of light in their visions of black.

England’s green fields, the red of the blood,

The gold we were promised, the blue of the sky

These are the colours we raise as our standard

Marching together, with Banners Held High.

◄ The Turning Of The Tide

Well up to the standard set by this contributor.
Whilst time sees old working practices superseded - and has done
down the centuries (foot-wagon-coach-rail-road-air: to cite some
aspects of the travel industry), the injustice of poverty demands
righteous anger and remonstration in any generation, even more so
when its victims have given much - even to an incapacity to earn - in
the service of their country. There is an irony, however, that a society that produces food banks also produces the condition of
obesity on a truly worrying scale. Back again to the constant challenge of obtaining balance in the demands of this life we live.

this is an Anthem for Justice -

"Your actions speak louder than all of your promises"

- the rise of food banks is a disgrace,
the rising number of children in poverty cannot be justified in this day and age, not one child should expierence hunger and deprivation.
We are not a poor country we should invest in all of our children's education, nuture them and prepare them to play their part in the country's future with a more balanced view of life than is shown by our present generation.
Sorry I went right off line here, it makes me so angry that there are still people that are seen to be of little value.
Dorothy

Brilliant my friend, just brilliant and absolutely on the money. To this day it should be the shame of our nation how those that took the ultimate risk and saw their brothers and sisters pay the ultimate price were treated then and are treated now on their return.

Thank you for another poem of excellence, one which speaks to me as an ex soldier of ten years.I receive a weekly Army pension less than a job seekers allowance. This comes from a grateful nation. The other day I saw a very elderly lady as she was leaving the local supermarket. By the door is a basket which was entitled..."because of you", donations for those in need. The old lady stopped and peered into see what had been given. I do believe if no one had been looking she would have taken something and who could blame her. This society and its government turn a blind eye to poverty and insult ex servicemen.

Thank you again. I will hold the banner high
Keith