The Magic and Mystery of Ministry 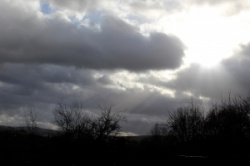 Know how in the 1970s the televangelists
All had perfectly sculpted and blow-dried hair?
Well, my Daddy was at least partly responsible
For all that glitz and fancy get-up.

He didn’t do hair for anyone as famous
As Pat Robertson or Jim Bakker, but
Styled hair for some big traveling evangelists
Like Gene Williams. These guys would take the
Word of God around the world, but come back
To Galena Park to get their hair done right.
Sometimes they’d come to the house, too,
And they were always downright charming.

I used to like playing “The King is Coming”
On the piano because it started soft but
You’d be banging on the keys pretty hard
By the end of it, and my parents liked me
To play it for the preachers, even if
I wasn’t very good. And they’d always say,
“That was real good. You should be very
Proud of your boy. He’ll grow up to
Be a great Christian.”

They would burn forever just because
They hadn’t heard the good word.

“Why would Jesus do that,” I asked.
They said, “Because he loves us.”

◄ On the Disastrous Art of Losing

The Impact of Utilitarianism on Unsuspecting Feet ►

Thanks, Martin. Look forward to seeing you.

A real piece of history here Randy
See you soon

Thank you very much.

Nice one
Lovely and full of teaching.