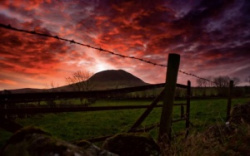 This weeks Poem of the Week is 'Once Upon a Time' by Laura Taylor, a piece written for NaPoWriMo from the prompt 'write something that involves a story or action that unfolds over an appreciable length of time'. A raucous battlecry of a poem, it strides out with a purpose and the unrelenting rhythm and pace makes you surge along with it. The subject matter is both dark and premonitory – with hints of revenge and violence – beware the unwary traveller.

Below Laura tackles our Q&A:

I'd gone to see a mate's band in the Tudor pub in Wigan and bumped into a woman I'd met the weekend before, who I'd got on with like a house on fire. I asked her if she'd come to see the band, and she said no, she was a poet, and was one of the support acts, which knocked me for six.  Anyway, I sat in the darkness, listening to and watching her, and by the end, was completely choked up with emotion. I left that gig thinking 'I've got things to say too".  I checked out WOL because she'd mentioned it, found a writing exercise on the front page, and wrote my first poem, 'i-museum'. Blogged it, and it got tons of astonishing praise, to my utter surprise and delight.  And then I just carried on because I had so much to keep saying!

I wrote that first poem in September 2010. So eight and a half years. I always loved to write, was always obsessed with words and language, but it never occurred to me to write poetry, plus it just 'wasn't for the likes of me'.  If I thought about it at all, I thought it was an elitist art form.   I used to love writing stories, and then essays at university as a mature student, and must have started a dozen novels in my teens, but never poetry. Now it's my second skin.

Not any more, no, because I perform at gigs, festivals, fundraisers and the like these days, but a few weeks after I'd written that first poem, I decided to take the plunge and see if I could perform poems as well as write them.  I went to a night run by Jeff Dawson in Bolton, and did my first ever open mic there. Although absolutely terrified, I was instantly bitten by the performance bug, so I  went along to the Tudor pub again, where they had a monthly open mic. I went religiously for just over 2 years, and it was just fantastic. The atmosphere in there was  totally anarchic and it used to get called the 'bear pit' of the open mic circuit.  I thrived on it, and learned so much of what they call 'stage craft' there, as well as making new and lasting friendships with people who were different and odd, like me. I felt completely at home and happy there, after a lifetime spent feeling like the outsider, a total social misfit.

The biggest, fattest, newest version of the Oxford English Dictionary please.  I have been reading various editions since I learned how to read, and it's been an endless source of information, amusement, knowledge, ideas, and surprises.

Once Upon a Time

the Widow Scotia lies in wait;

and twist in curl and bloom of cloud,

Four hundred years before Our Lord,

the Pharaoh’s daughter drew her sword

for to avenge her husband dear.

Her stumble-steed, in error, fell,

and now she bides in Foley’s Glen.

And how she keens, how she moans,

all these years of grief and tears,

all this time alone.

Carving wrath in silt and stone,

she cuts her tongue on jagged banks.

the green she spits upon the rocks

for wanderers to skid and crump

and feed her fierce hunger.

With ancient tongue, and hate within,

She seeks Dé Danann - stand aside!

She’ll jump upon your back astride

and with an awful curdle-cry,

she’ll ride your flesh to bone.

And how she bellows! How she crows!

all these years of bitter sorrow

To those who deem her cruel and cold,

this desolate and broken soul

has lost her lover, children, home.

Cast not your one-eyed pious stone.

◄ Thank u very much for this Wirral poetry festival line-up

Thanks very much Dorothy and Trevor ?

Laura
I love this 'magical' poem -it reads like a song,
thank you for it.

Fabulous poem Laura. I can almost feel the wild wind blowing through my hair as I read it. It just jumps off the page.
Love it

really liked this one as soon as I read it - great pace and rhythm and the repeat lines drive it ever onwards ?

A really beautiful poem with a pace and grace that combine perfectly.