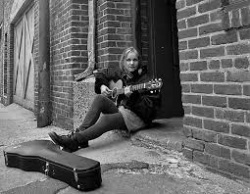 Eva Cassidy had a malignant melanoma mole on her back removed in the 1980's. It reappeared in 1996. The swiftness with which it does it's deadly work is unreal. It's a very fast-growing cancer – ignore it at your peril

but you left memories

they pull at my emotions

they make me cry

The saddest part of the story is that she had to die to get the acclaim she deserved. Prior to her death she was a virtual 'unknown'.

◄ No Brexit Here. We Got No Problems

Posthumous fame, so often an artist's fate. Thank you for bringing her to our awareness. Love your poem and her soothing melody. ?

I was aware of her name and late arriving fame but not familiar with
her performances. She seemed to follow the style that saw Judy Collins,(later on Kate Melua in the UK) and others become popular. Not sure how one develops a cancer on the back of the body
unless through damaging exposure to the sun but its "hidden
from usual view" position shows how it can become so dangerous.
A sad reminder of a talent taken long before her time.

I second Dorothy - this is sweet and touching, something we can react to, speaking straight to us. Nice one Don.

I have only been writing less the two years and decided to look back at what I was writing as a 'Poet in Training' as I called myself then. I did not feel deserving of the title 'Poet'. at the time. Now I think, did I really write this? This one from July 17 pulls at the emotions. I shall look for more

One of my favourite singers - in fact - the favourite of favourites.

'Over the Rainbow' is so heart-felt and her story is so heart-breaking.
Having read your poem I now feel compelled to play 'SONGBIRD' loudly so that it echoes throughout the house.

More like this please - sad and sweet prompting a reaction.
'dorothy