Was it a waste of an egg? 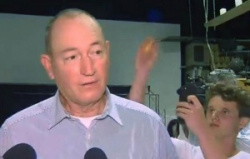 Was it a waste of an egg?

The one that broke on your head

Catapulted you into the limelight

But not in a very good light

The figurehead of the far right

You dare to suggest that the victims of hate

Were somehow the architects of their own fate?

Are you crazy Fraser?

I could understand if you blamed the devastation

Of the Indigenous Australian population

On white migrants and white immigration

As this statement rings true

And your pastoral kin, who

In a greedy bid to exploit and expand

“Hunted blacks” and stole their land

Kidnapped their boys to work as hands

So we come full circle and the question I beg

Is, was it really a waste of an egg?

Not the egg that broke on your head

But the egg your Father impregnated

The egg your Mother gestated

The egg from which you were created

Because let’s face it Fraser

The worlds a better place Fraser

Racism is today's catch-all phrase. It is being used to define those
driven by religious motives for attacks which are becoming too prevalent. Extremists of all kinds are to be confronted but we should
also confront the situations that allow them to preach their sermons!

Yep, same here, I've got no time for racist pricks.

Well said. I am with you all the way on this one.