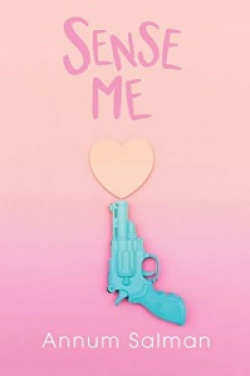 A well-informed article recently published by the Guardian discussed poetry’s wind of change over the last few years, and mentioned young poets such as Rupi Kaur, whose bestselling works can be found nestling alongside Keats and Carol Ann Duffy in your local bookshop these days.

Poets such as Kaur have led a boom in poetry sales  – and have been largely responsible for it – by bypassing traditional gatekeepers and, at least initially, self-publishing their works. Somewhere along the way, in this brave and newly confident world of the “Instagram” poets, what used to be scorned as vanity publishing has laughingly shrugged off its stigma.

It was in this context that I found myself opening with interest the pages of Sense Me, a debut collection self-published by young Pakistani poet Annum Salman, who stepped up to the open mic run by Write Out Loud Woking at our local literary festival last year, as a creative writing student from the nearby University of Surrey.

She comes from a PR background in Pakistan, and the review copy of her book, a hefty 150 pages, arrived gift-wrapped - in a pink, decorated box, with more glittery trimmings inside. But never mind the packaging. Yes, there are in this collection plenty of poems about relationships, as you might expect of a young poet. But there are also others about being a woman, a daughter, and a foreigner, and about issues of mental health, sexism, and racism. ‘Accents’ begins

You laugh at my accent,

I try to copy yours.

Mouth-wash with superiority and correctness

So, I can pronounce properly a language learned years

Which still intimidates me to my core.

‘Dear Mother’, another early poem in the book, is stark and shocking, with every line quotable:

You never taught me how downright dirty I was just because I was born a Girl.

You didn’t teach me that being born with a vagina came with a price;

That my breasts were objects for men’s eyes

And my body a museum open for visitors even if I didn’t like it.

Mother, you never told me

I’d have to bite my tongue because I have no voice.

If I was gone;

If I ever had the courage to make my own choice.

‘Sunday Brunch’ details family tensions about marriage, and the right type of husband, and religion, and is fascinating to western cultural outsiders. The poet, in her sense of detachment, is already a cultural spectator herself:

That brown is foreign,

Urdu does not roll easily.

There are some poems that disappoint. ‘A Love Letter to Karachi’  - (“You have been painted red and wiped, / Your violence has been immensely hyped”) – is over-rhymed, and could have been so much more. But Salman’s more personal love poems will strike chords with many people, and particularly women. The front cover of the book displays a heart, and a gun.

That Guardian article which I referred to at the start of this review also discussed the poetry row that erupted last year when the prestigious PN Review magazine ran what amounted to a critical hatchet job on the highly successful spoken word poet Hollie McNish. The Guardian quotes McNish’s editor at Picador, Don Paterson, who was also, implicitly, criticised in the PN Review piece, as saying: “I think you’re obliged to make some account of what the culture regards as important – or at least learn to distinguish between not liking something and not understanding it. I used to think I didn’t like performance poetry. But if an activity is widespread and clearly involves a lot of intelligent people – you’re the problem.”

Write Out Loud likes to think that it is part of this phenomenon. You may not be able to compare us with Instagram – yet! – but we have watched with increasing amazement and pleasure as young poets from across the world have seized on our “open door” Poetry Blogs section to make their voices known to a wider, global audience, and road-test their poems at the same time.

I learn from you, ways to blend,

Learn from me, to accept

Flaws and the spice I add,

To your street markets

And if one day you can,

You too will be known for your hospitality.

She is due to return to Woking’s literary festival this April, and appear during five hours of open-mic poetry  – but this time as one of Write Out Loud Woking’s guest poets. We are looking forward very much to hearing her extended set.

Good luck to Annum Salman, there's a world of passion and misrule to be dealt with. I came onto this article hitting the Guardian link, this doesn't touch on my view of the work reviewed in this article, but a general point was made, & I think Bill P is right:

If I’ve learned anything,”Paterson says, “it’s that I should stop paying lip service to this lazy rubbish about poetry being a broad church. It can be many churches, and we needn’t worship at them all.”