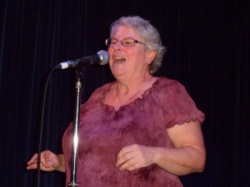 Wigan Write Out Loud returns to the Tudor on Thursday 14 February - for its last session? It's one of the most iconic, idiotic, idiosyncratic - and, for many, career-launching - open-mic poetry nights in the North of England. But Write Out Loud Wigan’s future is now in the balance. That’s according to present coordinator, Louise Fazackerley, whose own successful career owes much to the Wigan night. But so successful is her poetry career - she's in demand for gigs and workshops - she now needs to step down from the role.

“I feel the flavour of the event is 'Save Wigan's Open Mic Night'. The night has continued at The Old Courts with a loyal cohort of talented writers but we're in desperate need of a new co-ordinator to give new energy and care to the night”, she tells us.

I must declare an interest here. The event has been running for 12 years, following a successful Write Out Loud open mic event at the Orwell pub in April 2006 that I ran as part of Wigan Words Festival. Write Out Loud then managed to persuade festival organiser Gillian Forrester to support a monthly night at The Tudor, which she did with great enthusiasm. After I stepped down from the coordinator role to concentrate on running Write Out Loud, which had by then become a national phenomenon, we had help from Louise Coulson and others before John Togher took the reins for an astonishing ten years, turning it into one of the highspots of the North West poetry scene, hosting an array of talented poets: slam winners, competition winners, festival favourites, some of whom are now professional and semi-professional writers and others who've published amazing poetry books, such as 't'owd chap' George Melling, Hilary Walker, Eva Curless, Jacqueline Pemberton, Natasha Tingle, Shaun Fallows, Laura Taylor and Nationwide star and rap-battler, Joy France (pictured).

Before the Old Courts became its venue, the highly popular Tudor Hotel was the base for many years until ill-health forced the pub’s closure. In spite of the many challenges for poetry performers - a room open to noises off from the bar, the loudest hand dryer in the world trying to get in on the poets’ acts – the pub was very supportive and extremely popular. They even relayed the sound of the poetry performances around the large pub, attracting folks to come along and listen, some to become regulars and find their own voice through poetry.

The Tudor reopened at Christmas out of a love for the pub trade and their regulars, but it's uncertain how long it will remain open. The Old Courts, home of  Write Out Loud Wigan for the past few years, is having  a substantial refit but by March the upmarket Bailiff's Bar becomes available, with its warmer, quieter, comfier space. The choice of venue will be an early question for any new coordinator as she or he joins the ranks of those heroes running Write Out Loud nights at Woking, Bolton, Sale, Stockport and Marsden.

They can be promised potentially exciting times ahead as part of a Write Out Loud that launches new ventures in 2019, building on its Marsden the Poetry Village initiative, its Young Write Out loud initiative, more poetry competitions and developing university links. Prospective coordinator volunteers can contact Louise at louisethepoet@live.co.uk.