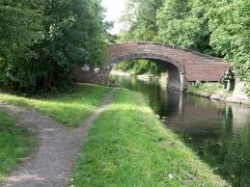 of grass and broken brick

removed from sight where an

Old cargo crane chained to the

past sits motionless and rusting

waters, and in reeds lays kingdom

to towers of browning yellow and green

a rusting gate, derelict a reminder of

Locket tight and hidden from view

this place with no promises to keep

the memories of men

this canal bank this basin

and vibration the tone of speed

as she breaks the air through which

she passes skimming to blur her mirrored self

A Past reflected in dirty water

and traders of bad repose

long since buried and dead

Sabbath to drink then

or brawl, once boatmen idle

before god waiting for loads,

all stop, for day of salvation

Lost souls to save, but not those working men

or women that whore, damned were all

And she sits in shadow alone replete

in scarlet and opaque moving only to glitter

sensing only her kind only to feed

And war-like she hovers

twilight to prism through broken bottles so

shards of light now break upon the surface of this water,

where fly-boats once filled with cole

ale or cotton and lumber

and foul words with spit

in commerce once spake

now not even ripple

her kingdom her rule

The Sabbath was made for man. It was designed by our beneficent Creator, as a period of rest;—of cessation from secular business and labor: but it was not intended to be spent in idleness, nor its hours employed in mere recreation and pleasure. In its principle, it was designed, as much a period of rest from pleasure and amusement, as from the toil of business

Thanks Trevor glad you liked it.
Incidentally And is probably my favourite poem

I don't peruse this site as attentively as I should - otherwise I would surely have commented on this excellent poem. Also like your sample 'And'. cheers Trevor

Hi Richard
A great Poem and a vivid description of a hard past for many manual workers with nods to religious obligations for many, the actual physical place now becoming the modern day kingdom of the dragonfly, the exploits of the past now just memories.
"War like she hovers"
Well done m8