Whose life is it, anyway? Writing poetry about real people 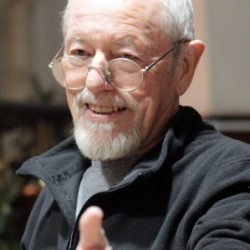 A couple of years ago, I was writing in my own blog, the great fogginzo’s cobweb, about the way I had found myself conflicted about learning things about my granddad’s life that that didn’t fit with poems I’d written about him; how I was feeling uneasy about the truths of documentary records, and the truths of poems and poetry. I think it bothered me particularly, because it took me a long time to put people in my poems at all … 10 years ago, pretty much all my poems were like my photographs: unpopulated landscapes.

I tried deliberately to break out of the straitjacket of endlessly writing pretty/atmospheric/repetitive (inevitably) evocations of places like Skye and the Pennine Moors. I took my cue from Carol Ann Duffy’s The world’s wife,  because I saw that I could try ventriloquism, learn the way of other people’s voices. I wrote monologues for all sorts of famous statues, like the Angel of the North, and for an artist who had fascinated me, and for his wife, and his model.  But never about real, living people … or, at least, about people who I knew, and might get to read the poems.

I suppose the first breakthrough of sorts came in the guilty relief and release –for both of us, I want to believe – that came when my mother died in her 90s. She spent the last 15 years of her life in a nursing home following a severe stroke. She fought against every moment of it. She resented and hated it. I took her ashes to the Valley of Desolation, her favourite place in Wharfedale, and soon after, wrote a poem about it as a sort of atonement or prayer for absolution. Then I felt guilty that I’d not written for my dad, so I wrote about his birdwatching, his shoe mending, his singing; and then I had to balance it up with more about my mum. It’s a strange thing, guilt, but the outcome was that over about three years I’d written a handful of poems, and more about my grandparents, and it seemed to come more easily with each one. I didn’t feel as if they were looking over my shoulder, tutting. Or not as often, or not as loudly.

But I can pinpoint the big breakthrough to specific dates. In October 2013 I was on a writing course at Almaserra Vella in Spain, and the tutor was Jane Draycott. She gave us a quick writing exercise … first impressions, get-it-down stuff on a randomly chosen postcard, which happened to be a Penguin book cover that had images of flame on it. And I wrote about our friend Julie who we’d visited in her flat in Whitby a couple of weeks before. Julie was dying of an incurable cancer; she’d confounded the specialists by outliving their predictions by over a year.

Flames. The most tenuous of connections. But a flame burned fiercely in Julie, and in the underlit smokestacks of the Boulby mine just up the coast. Maybe that was it. I typed it up with very few changes the week after. When she died a couple of weeks later, I nerved myself up to give the poem to her brother at her funeral. I was genuinely frightened. But he liked it, shared it. Gave me a permission I realised I needed: to write honestly about and for real living people. That poem 'Julie' won first prize in the 2013 Plough competition. Andrew Motion had liked it! I used some of the prize money to put together and print my first two pamphlets.

Which is where it gets just a little more complicated. We’ve been going to the Isle of Skye for 30 years, renting a bungalow from Norman and Effie Macpherson in the crofting valley of Achnacloich on the Sleat peninsula. Norman was a shepherd all his working life, on Ben Lomond, on Ben Nevis, and finally, till his death eight years ago, back on his home island. Every now and then I’d try to write about them, but always felt conscious of what I imagined would be their wry, dry take on the whole sorry, impertinent business. What did I know? Even so, when I put my first pamphlet together I wanted them in: a seven-poem sequence titled 'Crofters'.

If anyone else had given me permission for that, it was Norman MacCaig, who I read and re-read, trying to nail down just how he did it; that apparently simple thing of writing about the people and hills of Assynt that he loved and knew better than I’d ever know Skye, or Effie and Norman. Anyway, that’s the thing I was after. The way Norman Macpherson would hide behind the barn to smoke, the quiet pauses of Effie’s speech. Here’s Norman

He’s laid up in the house:

and maybe sheep-dip’s to blame.

and Effie, the first year after he died, feeding the sheep that come running

ignore the black and white dog,

the woman in the pilled grey fleece,

her hair that breezes cannot ruffle.

It was an expensive dog, that one. Norman went down to Tyndrum to buy it. A serious business, buying a working dog.

I still didn’t feel right about publishing the poems. In a diffuse sort of way, a way that says: well, they’re not going to see these poems. No one’s going to buy them after all.  That sort of thing. And then I wrote some more, and sent some in for competitions. A poem called 'Norman' came second in a York literature festival competition. I wrote from memory and feeling. Some things I know are factually true and some as though they ought to be.

could birth a lamb in the lee of a dike,

smit a skittish ewe in a squall,

pin down a ram and not give a jot

for its yellow stare, the black slot of its sideways eye,

over three miles of bog,

make good a tumbled fence with a twist of twine,

strip out an axle on a Subaru,

haul a whole flock through

and still tell a tale

over the clamouring misery of bleat.

He could walk all day

in a pelt of rain and a sack for a coat.

To put down a runt

or one with a goitre

or one with a sprain or a maggoty arse –

that was beyond him quite.

The days for the slaughterman’s truck

he was away over the moor.

He knew where the first primrose showed.

I knew all about the Subaru, but the Herdwick was there for the heft of the word. It would more likely have been one of the blackfaced sheep. I don’t know the proper name. A Cheviot? What I was after was the mix of Norman’s durability and the sentimental side he could show.

He once told me he knew a secret place in the woods beyond the headland. He’d take Effie there to show her the first primroses. They can’t be got at now, because of the deer fences. He was cross about them, because now there are no deer to keep down more competitive plants.

The man at the garage in Armadale told me that all the neighbours were pretty sure that years of exposure to organo-phosphates in the sheep dip played a part in his illness. That had to find a way in.

That’s Norman who I didn’t know all that well; but it’s the Norman I remember. I worried about whether Effie would recognise him. Or think me obtrusive. An incomer.

The business was finally settled for me when Liz Lochhead picked a poem as the winner of the 2014 Plough competition. It pivots on something Effie happened to say when I told her about an odd meeting in the rain down in Tarskavaig. This is it.

Washed up on a rucked-rug  shoreline,

to look to the barns, and count the spades,

and what did they ask you for,

on the windscreen, brown as selkies.

For a light only, the bright ember,

blue smoke blown on the wind, the spit

of rain off the sea, and thanks we’re away

down the road and done with the day,

with turning stones, with lifting kelp,

browsing the hard shore for a knuckly net

What’s to be done with the Tarskavaig tinkers

who come up out of the peat or the sea?

And when the light goes, where do they turn?

We’d had a laugh over that. Not ‘PC’, that ‘tinkers’. "But they’re tinkers just the same," said Effie. And I cut her some cake. Well, it takes more than a slice of cake to say thank you for putting someone out there in public, when you never said please in the first place. I had sleepless nights over it all, then said the serenity prayer. The bit about asking for courage to change the things we can. I made a neat parcel of my three pamphlets, and wrote a letter that took me more redrafts than most poems, all explanation, mea culpa and apology, and posted it all off to Achnacloich on the Sleat peninsula of Skye.

Then I waited. And nothing happened. I thought maybe she’d gone to visit her cousin, or gone over to Ireland for a holiday, or … I thought over and over, what if she’s upset, or worse. Last week I bit the bullet and telephoned.

Oh, hello, she said. I was meaning to ring you … I feel guilty now, you know how things get put off, it’s been a terrible summer, och, the worst I remember, dreich days, and grass poor, we’re taking supplements up to sheep; yes, I got your books. We liked them. Norma says I’ll be famous now. Och, no, of course I’m not cross.

For two days I walked on air, and that November I was able to go and see her, and all was well. Whose lives are they anyway, when we write? I have no idea. But I know we’re responsible for them, and the truth of them. Whatever that is.

This is my idea of poetry, John! Jean xx

Writing poetry about real people
...wonderful John Thanks
I am a hospice poet and have used all sorts of ‘voices’ on behalf of patients over 8 years now. It’s a privilege to reflect one work of art with another!