Where the road runs out: Gaia Holmes, Comma Press 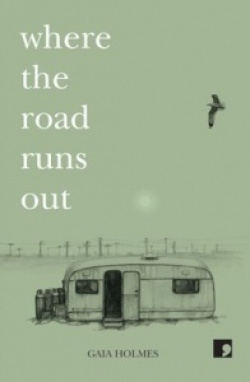 Gaia Holmes is a Halifax-based poet and creative writing tutor who has previously made a living as a busker, a cleaner, a gallery attendant, an oral historian, and a lollipop lady. The first section of her third collection of poetry describes living on the Orkneys while caring for her father: “My father is fevered / and godless. / My father is dying / on an island / with no trees.” (‘Leaves’).

‘I belong Here’ is suffused with detailed observation and love:  “Your angel, your fumbling nurse, your little star, / stumbling around in your size 10 wellies // walking to the village shop / to buy red wine and Complan”. But she soon loses her angelic status, buying the wrong kind of green tea from the village shop: “I’ve knackered my back / from trying to shift the moon, / angling it so it shines in to his room.” (‘Feckless’):

to make the caravan shake,

to make the clock fall off the wall,

to scare the fat white cats

from where they lay

scorching their fur on the gas fire.

There are poems about hunkering down against the weather, the effects of morphine, and the process of dying: mumbling “clumsy Latin” at the bedside (‘Reek’); the pretence of ‘Playing Alive’ in the hospital; the “edgeless” hunger of grief (‘Kummerspeck’). The windswept, bleak island provides a raw backdrop, and this sequence of more than a dozen powerful and convincing poems is rightly at the forefront of the book.

But there is much more. For grief leaves a hole; and Holmes reveals herself to be somewhat obsessed with holes in this collection. There are ‘The Hole Room’, ‘Holes’, and ‘And there was Just this Monstrous Hole …’, to name just three titles. Sometimes the words are whimsical, or about sinkholes, or about loneliness. A sequence, ‘Remembering Light’, imagines what it was like for a group of Chilean miners trapped below ground in the Atacama desert for 69 days.  There is a poem about a woman with a “hollow body” (‘Those Spaces You Try to Fill’), a theme returned to in ‘Ballast’:

and you sit there for a while listening to them talking

and think about the things they have:

the husbands, the high chairs, the family-sized toasters,

the pairs of tiny red wellies lined up by the door,

and you think about your lack.

To offset any domestic yearning, there is a wildness, and arresting images, within poems such as ‘The Mushroom Gatherer’ and ‘Sacramental’. Holmes reaches for what’s beyond the protective front door in ‘The Allure of Frost’; even her fridge is full “of glowing coals / and forest fires /raging in old pickles jars”.

Inevitably in a collection of this size there are poems that individual readers may find less effective, just not their cup of tea. The whimsy of ‘In The Pancake Room’, or the house going on a hike (‘The Twitcher’) feels overplayed; however, ‘Last Orders at the Light Bar’ dazzles, Holmes at her best:  “Their tongues are embers in their mouths. / The insides of their throats are the colour of foxfire.”

There are at least a couple of poems on the baleful effects of the internet, which Holmes feels edits out the elemental:

We did not know

how to edit our lives,

walked out raw into the world

We placed our faith

It is a long, angry poem that appears written in a hurry, the terse lines dashed off, unedited. Perhaps that is the point. To emphasise it, ‘Google-it’ registers empathy with redundant volumes of encyclopaedias in the digital age. The mood softens towards the end of the collection with love poems such as ‘Road Salt’ (“trying to melt myself / a path to you”); ‘The Morning we Dragged the Settee into the Garden’ (“when the last cold rind of winter / was giving in to spring / and I wanted to be with you / and out in it”); and ‘The World’s Sharpest Knife’ (“In sleep our limbs knot, / Our bodies lock. / Your heart borrows my beat.”) The final poem, ‘Hope’, looking up at the stars, is Holmes at her lyrical best:

keeping the moon from slipping,

into our sleeping houses

through all our rooms

fluent and loving as milk.

This is a generous collection of more than 60 poems, in a publication that elegantly gathers them together. The poetry of Gaia Holmes is always open-hearted, seems easy to follow, but quite often takes you further than you had first expected; her language and images can be full of surprises. Readers should feel all the better for sometimes finding themselves in unfamiliar territory. Where the road runs out, indeed.