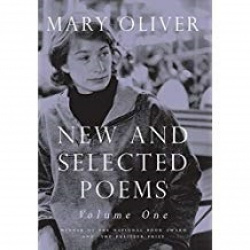 Mary Oliver, a celebrated and award-winning poet of the natural world, has died at her home in Hobe Sound, Florida, at the age of 83. She published more than 20 collections, and won the 1984 Pulitzer Prize for American Primitive, and the 1992 National Book Award for New and Selected Poems, Volume One. Her influences included Whitman and Thoreau.

In one interview, Oliver described her family as dysfunctional, and revealed that she had been sexually abused as a child and had experienced recurring nightmares. In another interview, she said of growing up in Ohio: “I don't know why I felt such an affinity with the natural world except that it was available to me, that's the first thing. It was right there. And for whatever reasons, I felt those first important connections, those first experiences being made with the natural world rather than with the social world."

Her poetry was inspired by the landscapes, the rivers and creeks of her native Ohio, and later by the ponds, beech forests, and coastline of Provincetown, in New England. She spent her final years in Florida. “I could not be a poet without the natural world,” she wrote. “Someone else could. But not me. For me the door to the woods is the door to the temple.”

A New Yorker article about Oliver's 2017 book, Devotions, said Oliver wasn't always appreciated by critics, but she was still one of the country's most popular poets. In an interview Oliver said: "Poetry, to be understood, must be clear. It mustn't be fancy …  I always feel that whatever isn't necessary should not be in the poem.”

◄ Where the road runs out: Gaia Holmes, Comma Press