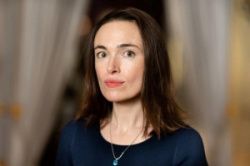 An associate professor of English at New College, Oxford, has won the £25,000 TS Eliot prize with her debut poetry collection. Hannah Sullivan’s Three Poems, published by Faber, is the third debut collection to win the TS Eliot prize in the last four years.

Sullivan had not been widely published before her debut book. The chair of judges and previous winner Sinéad Morrissey said: “A star is born. Where has she come from? I don’t know her personally, I hadn’t read her in magazines or anywhere else before. She has not come through the usual creative-writing, pamphlet route. She has just arrived, and it is breathtaking.”

Sullivan is aged 39 and lives in London with her husband and two sons. Her collection is made up three lengthy poems: ‘You, Very Young in New York’, which explores the lives of various young people, making their way through unfulfilling relationships and work in the city; ‘Repeat Until Time’ is an exploration of revision in art and formt; the third, ‘The Sandpit After Rain’ explores connections between the birth of her baby and the death of her father.

Sullivan was one of five new voices on the 10-book TS Eliot prize shortlist. You can watch vidoes of her talking about her work and reading her poems here.

Where the road runs out: Gaia Holmes, Comma Press ►

That's a LOT of scratch.

You wanna loan me some??