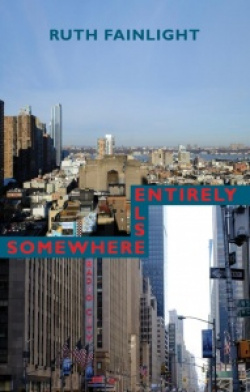 Born in New York between the two world wars, Ruth Fainlight has lived in England since she was 15 and has had a long, distinguished career as a poet, translator and writer of fiction, drama and opera libretti. She received a Cholmondeley award in 1994 and became a Fellow of the Royal Society of Literature in 2008.

Like much of Ruth Fainlight’s writing, the poems in Somewhere Else Entirely are markedly autobiographical. I was new to her work and surprised by its everyday quality and conversational style. For example, in ‘Late Spring Evening in the Suburbs’ – itself a somewhat prosaic title, we read, ‘Sunday in the suburbs. Last night, next-door/lit their barbeque. Windows alert!/The smell of charring meat clings to the curtains/and the sliding door of the kitchen extension/had to be closed, fast’. Would these poems cast a spell over me or excite my imagination?

As I read on, and re-read, I came to trust the scope of her writing, its expert transitions from easily overlooked details to vast themes of mortality, loss, time and solar systems. With sparing use of imagery and subtle internal rhymes and echoes, the collection returns often to gardens, the squares near her London home, the allotment. In such settings, Fainlight explores widowhood, loss, illness and the fear of diminished faculties, as well as love and erotic attraction. They say death, like the sun, cannot be looked at directly.  But she takes it on and here her confident use of the everyday and her refusal of over embellishment are key. ‘Timeless Waters’ begins “Thinking about time: wondering/how much time is left:   whether/it’s time to start detaching   time/to clear”.  Then from the verb ‘clear’ it moves to ‘clear water’and stanza two begins with “To drink a glass of clear water/float on a green and blue ocean:’. Finally, in stanza three, we have Fainlight contemplating death directly:

return to that warm amniotic

fluid   return to the ocean:

This tracing of the pathway of thought, from mundane downsizing to “those timeless/waters of life”, is characteristic of her work. For example, she begins ‘The Ides of March’ with simple description: “Now, blue sky and a few clouds, the air/sweet and mild: the year’s best day” but then imagines the plight of a farmer who, “stiff with dread”, sees his crops ruined when “the weather turns”.  From there she takes on God, not the farmer’s God, but “the Master God, the God of gods” and leads us out into “the millions/of solar systems spangled through space” where the Master God “as ever, is an absorbed spectator” of “thousands of creatures … wailing and beating/their breasts”.

From some early doubts, then, I did fall under Ruth Fainlight’s spell and came to trust her voice. Her recognition of the magical potential of “idle thoughts” (in ‘The Difference’) is inspiring for any poet/reader, as is the poetic use she makes of her dreams. For me, married for 50 years, the six powerful poems early in the book about the death of her husband, Alan Sillitoe, drew me alongside her - and I remained there for the rest of the collection. As accounts of later life bereavement, they made utterly persuasive reading: her recollection of long shared motorway drives (‘The Motorway’); of him, sick, sitting in their local square while she makes “my daily circuit” (‘In the Square, I Snowdrops’); her exhaustion after sleepless nights in an empty bed (‘In the Square, II The Choice’); forgetting what happened the last afternoon she saw him alive (‘Oxygen Mask’), a photo of Elvis Presley and another man, with brilliantined hair and a tweed jacket that strongly evoked ‘Alan’ (‘Alan’s Jacket’). And the final poem in this sequence, the collection’s title poem, ‘Somewhere Else Entirely’, which ends with the stanza:

Where you sleep, day and night,

is dark and cold and silent:

Like A Fish Out Of Batter: Catherine Graham, Indigo Dreams ►