Like A Fish Out Of Batter: Catherine Graham, Indigo Dreams 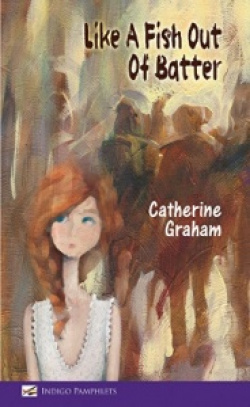 I grabbed this slim volume from the review pile by my bed on the way out to a frantic day of driving between the vet, the hospital and back to the vet. I knew it would be a stressful day and wanted something to soothe my brain in between appointments – I couldn’t have chosen a better antidote to anxiety.

This is Graham’s third collection and is inspired by the people in Lowry’s pictures. You don’t need to know the paintings but you can look them up to see what tickled her fancy.  Some poems take the title of a picture or she makes up her own titles. And she has created characters to thread through the work – Maureen and Ray – whose lives we see unfold. In ‘Girl with Bouffant Hair’ Maureen is tarting herself up for a date:

My mother sits on the end of my bed,

watching me get ready to meet Ray.

‘I wish you wouldn’t backcomb your hair like that,

it makes you look common.’

It’s never worth answering my mother,

she loves me too much to listen.

As Maureen goes out in her camel coat and kitten heels her mum watches her catch the bus: “My mother, standing on the toilet seat to reach, / pushes open the bathroom window, / “Mind you catch the last bus home!’ Her voice wavers / as she closes the window and mouths my dead sister’s name.”

‘Arthur and the Rent Collector’ is perfection in 16 lines, starting:

I call him the rent man,

I don’t know his name.

I see him in the park

On scraps of paper and used envelopes.

Children flock to him, charmed

by his speed of hand and pencils

that smudge pictures to life.

Graham even turns that rather uncomfortable painting The Cripples into a funny and tender tribute to some of Lowry’s most awkward characters:

as if to bombard them with questions.

But not all that we see are

home from the war;

the polio leg, scoliosis, the stroke.

The collection follows the romance of Maureen and Ray via a doorway fumble after the cinema, a panicky dash to a chemist’s shop that was closed and eventually to a shotgun wedding and ….. I won’t give away the ending.

Catherine Graham is a Newcastle writer but she has taken Lowry’s Manchester and Salford subjects to her heart and worshipped them with her words. She’s even made a gorgeous tribute to one of my favourite pictures, Man Lying On A Wall, with her poem ‘Ray, Upstairs On The No. 8, Waiting For It To Pull Away’. Look up the picture before you read the poem:

Are you a doctor? I see

your briefcase against the wall.

Christ, I hope no-one’s waiting for you,

clinging to their last breath.

Hey up, we’re off, about bloody time.

GET UP YOU LAZY BUGGER!

HAD A HARD DAY PAL?

Sleeping it off are you?

Christ, I hope you’re not dead.

This is a tremendous collection, published in 2016, highly recommended and has earned its place as one of my favourites of the past decade.

Catherine Graham, Like a Fish out of Batter, Indigo Dreams, £6

And what a lovely review, Judy!