The Lyricism of Shattered Phones 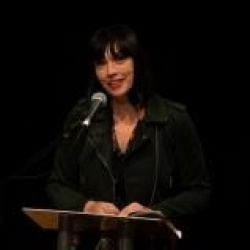 It was a world first for Winchester Poetry festival - the first time Irish poet Doireann Ní Ghríofa has performed in England, even visited, in fact, and the first time she'd read from her second English collection, Lies (The Dedalus Press, 2018).

Ní Ghríofa provided an almost perfect balance to Pascale Petit, who she was scheduled to read with. And the fact that the third poet’s car broke down was disastrous for him (J O Morgan) but presented the audience with the fortune of hearing more from the poet most of us knew nothing about.

The title of the reading was Let Light Be Enough and Ní Ghríofa responded by playing us the music of her poems in Irish, followed by her own translations. She made us laugh and she grounded the lyrical tradition she comes from in images of interrupted Skype calls and shattered phones.

Her pile of books on the bookseller's stall was gone as soon as the audience piled out. Like at a Surrey jumble sale, rules of behaviour were suspended. I saw a woman snatch the last copy off the table as a second, further up the queue, hesitated. A volunteer remarked that Ní Ghríofa could read a shopping list, her delivery was so melodic.

Paula Meehan, Ireland Professor of Poetry, describes Ní Ghríofa’s poems as fearless, generous and open-hearted. She’s been publishing in Irish, the language she was brought up with, since 2009 but held off her English debut until 2015 with Clasp (The Dedalus Press).

The poems she read to the Winchester audience were narrative, accessible and stitched with surprises. Take ‘While Bleeding’ which the US Poetry Foundation website features. It is an apparently anecdotal poem about a vintage dress until it moves imaginatively into “the weight of old red” and the coat itself blushes. Ní Ghríofa takes these wonderful leaps of faith and such is her confidence in the craft that the reader doesn’t hesitate.  In ‘Craquelure’ the screen on a dropped phone shows a child’s face “grown suddenly lined” and in fear, the poet calls for the bus to go back in time. This is a lot to ask of a reader, but it works through the insistence of language, its sureness.

Then in ‘Brightening’, a startling poem about the destruction of colonialists’ property in Ireland, Ní Ghríofa’s delivers a poem defined by surprise and vowel sounds, ‘oh’ repeated throughout until it gives way to defiance: “I am not meek……I blaze a Sunday through every week.” Ní Ghríofa could be writing about herself.

It says something about her attitude to her art that on a Poetry Society mixtape, almost every poem she features is written by a woman. Likewise, her collaborations are generally with women artists in other media – ‘The Breath from Fertile Grounds’ is with Nigerian born Otobong Nkanga and a residency at Cork Midsummer Festival led to her working with artists Alice Maher and Aideen Barry and musician Linda Buckley. Many of her poems have been made into films and her most recent collaboration is with Crashlands, a series of 20 music commissions that will be brought together by Ní Ghríofa’s poems and film.

◄ Language on the Side of Freedom 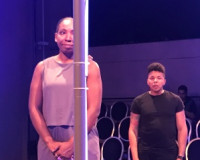