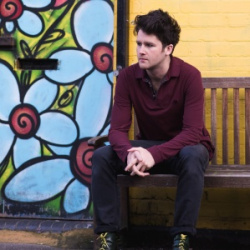 In June 2016, Matt Abbott’s hometown of Wakefield voted 66% Leave. Either side of referendum day, he was volunteering at a Calais Jungle refugee camp just 22 miles from Dover. Now this rising star of the spoken word scene is taking his first full-length stage show, inspired by these events, on an extensive British tour.

Two Little Ducks is a fiercely relevant exploration of identity, prejudice and class fusing socio-political commentary and contemporary kitchen sink realism. As his verse shifts from coal mine to council estate to Calais jungle, he explores the divisions and discord of modern Britain, unafraid to voice opposing viewpoints.  Matt said ‘I want to dismiss the sweeping generalisations of ‘Brexiteers’, whilst exposing the harsh realities of The Jungle that the mainstream media ignored. I feel qualified to comment having seen it first hand.’

Abbott makes full use of his razor-sharp wit, poetic storytelling and linguistic flair to present this personal and political show that both champions and confronts. This is poetry for the underdog from one of our leading new voices, presented in an engaging, accessible style that acts as an invitation and welcome mat for those new to poetry.  He explores a country and society deep in the throes of Brexit induced chaos and with his warm unaffected delivery has a unique cross-generational appeal.

An early version of Two Little Ducks attracted a slew of 4 and 5 star reviews at the Edinburgh Festival Fringe 2017, now this updated version tours the UK throughout October and November. The accompanying book Two Little Ducks, Abbott’s first ever full poetry collection, is published on 4 October (national poetry day) by Verve Poetry Press.

Watch a short introduction video to the tour here YouTube

News » Experience some Georgian poetry: translated and on tour in the UK