Experience some Georgian poetry: translated and on tour in the UK 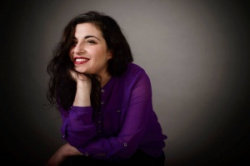 Two remarkable Georgian Poets Diana Anphimiadi (pictured) and Salome Benidze will tour the UK this May alongside British poet-translators Jean Sprackland and Helen Mort, and bridge-translator Natalia Bukia-Peters. This tour marks the publication of two new bilingual chapbooks, Diana Anphimiadi’s Beginning to Speak and I Wanted to Ask You from Salome Benidze.  All events will take place in English with poetry readings in Georgian and English.

Diana Anphimiadi is a poet, publicist, linguist and teacher from Tbilisi. She has published four previous collections of poetry from 2008 to 2013.  Her poetry has received prestigious awards, including first prize in the 2008 Tsero and the Saba Award for best first collection in 2009.  Salome Benidze is a poet, novelist and translator, as well as a campaigner for women’s rights. She won the Saba Award for best debut in 2012. She is the author of two collections of poetry and one novel, The City on Water which was a national bestseller and won the Tsinandali Award in 2015.

A bridge translation, also known as a ‘literal’ or ‘close’ translation, is an English version of a poem that is as close as possible in meaning to the original text. The bridge translator will produce this version alongside many notes for the poet-translator, outlining different possibilities and priorities for the final English translation, bearing in mind rhythm, meter, meaning, voice, shape and other considerations.

Both books are published by The Poetry Translation Centre, an Arts Council England National Portfolio Organisation, whose website offers details of the tour along with many other Translation Poetry events. The Centre was founded in 2004 by poet Sarah Maguire to give the best poems from Africa, Asia and Latin America a new life in the English language; to better understand and celebrate the diverse communities who have made their home in the UK; and to enrich the English poetic tradition through translation.