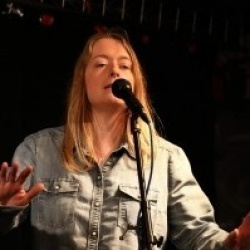 This week's Poem of the Week is by Becky Who, who was thrilled to be chosen. "This really means a lot to me, and thank you for a great web site, it has really changed things for me".  The pleasure is ours Becky!  Congratulations on being selected, thank you for sharing your poetry with us and for taking the time to answer our winners' questions:

It was quite by chance. A colleague of mine had the ingenious idea of putting a slam poetry project into our English programme, which was very successful with the students. For a laugh I wrote a slam poem for our student poetry event, and I've never stopped since.

Since an early age I've been filling note-books with ideas that I had to get out before they drove me crazy. However, I've only been seriously pouring myself into poetry since the slam epiphany about two years ago. Discovering Write Out Loud this summer has encouraged me to experiment with other forms of poetry than slam.

YES – for me this is an essential part of the poetry experience. I get my kicks performing on stage, and I also love hearing different poets share their work. I rarely miss the monthly open-mic nights at La Bobine in Grenoble, where they are very tolerant of me both slamming in English and massacring French. I long to try to perform in England though – I'm hoping to find some poetry nights I can try out when I'm visiting.

I'm discovering new poets, and styles of poetry, all the time. For the moment I'd have to say performance poets such as Harry Baker and Sarah Kay. Harry Baker's "Real Men" has me moved to tears every time I show it to a class.

I'd be completely torn between a hifi with a music streaming service, and an e-book reader with unlimited wifi. Could I have a laptop or tablet with all of those things please?

No problem with a hifi or a laptop on your island, Becky, not too sure what kind of signal you might get for the wifi though...

Here is Becky's winning poem for us all to enjoy:

Writing in Rhyme by Becky Who

I can’t help writing in rhyme. I do it all the time.

Rhymes sneak into my texts unbidden

Or if they’re not there, or are too well hidden

I rhyme almost against my will, I’d so like to possess more literary skill

To master assonance, or align alliteration

To write words that sing for themselves in impassioned poetic creations

That paint pictures for the ears and leave imprints like kisses on the soul.

Has English Language so defined my brain

I think in rhymes and words that sound the same?

As if Shakespeare’s ghost so haunts our linguistic pysche

Remember the rhyming books of childhood

A mouse took a stroll in the deep, dark wood.

We use rhymes to teach sounds and literacy, phonetics and the ABC

We try to teach kids right from wrong using rhythm, rhyme and song

Early to bed, early to rise, makes a man healthy, wealthy and wise

But can verse be something more than sonic, phonic verbal play?

Somehow it doesn’t pass for literature of high class

And when the going gets tough and we face adult stuff

We’re supposed to put the rhymes aside.

Well, I tried. I really did.

I set out to avoid rhyming. I didn’t succeed.

Is it wrong to rhyme about death?

Does it trivialize so much pain to reduce it to a verbal game, like childhood nursery rhymes?

My son had lost two grandparents by the time he was four.

He still asks “where’s Papi? Why don’t we see Nanny any more?”

He was in the house with me when my mother died.

I was giving him his breakfast when I should have been at her side.

Of course he wanted to know where she’d gone, and what was going on

I was advised not to euphemize,

Don’t say "she’s flown into the sky, she’s gone away"

As that leaves him to believe that she could come back some day.

And if that’s the worst he ever lives, he’ll be a lucky boy indeed:

If I were able to pray, I know that every day

Where sending children across the sea

Is a safer option than staying at home.

And you know, lots of rhymes are written about war.

Alan Seeger had a Rendezvous with Death, and he wasn’t afraid

Neither to die, nor to let it rhyme with “breath”.

Wilfred Owen, in his "Anthem for Doomed Youth"

What passing bells for these who die as cattle?

Battling misplaced patriotism armed only with his pen.

So death is part of life and as such should get the rhyming treatment.

Don’t stress about pentameters and such poetic feet

Who cares one jot if it rhymes or not – as long as we’re keeping it real.

https://www.writeoutloud.net/public/blogentry.php?blogentryid=71530
Loved your poem... I wrote this a while ago about rhyme and poetry... AnIffy poem! M x

Thank you again for all your lovely comments, it really means a lot to me! As I say in my poem, I seem unable to stop rhyming, even about serious subjects. (Although if that was really the case this comment should also be in rhyme!)

I found an old 'paper' last week, stuck between the pages of a poetry book, and I LAUGHED. It was five columns of rhyming words, no order, just sound. And I remembered, years ago, I had some fun tossing 'rhyme' words together and then trying to 'make' something intelligible. I do recall that I had a great time, challenging myself, to no end whatsoever. Just fun.

Great to hear rhyme defended!
John Betjeman got a lot of stick for rhyming.
Below are the 2nd and last verses of his 'Tregardock' (on a Cornish cliff top)

Only the shore and cliffs are clear
Gigantic slithering shelves of slate
In waiting awfulness appear
Like journalism full of hate
---
And I on my volcano edge
Exposed to ridicule and hate
Still do not dare to leap the ledge
And smash to pieces on the slate.

This is no trivial matter.

Tregardock is one of several of his poems I've set to music in the folk tradition.

Beautifully done. I think you’ve managed to take us through every emotion. And you’re right, there’s nothing wrong with using rhyme to express anything. (I find myself using internal rhymes a lot.) If that’s your style, go with it. You’re in good company. Plenty of awesome poets do. You’ve done a great job of using it meaningfully.

It took me a while to get to the bottom but was well worth the effort. You little rhymer you ?

A cogent and creative stance about the irresistible lure of
rhyme and its poetical bedfellow, rhythm. The undeniable
fact is that the most memorable poetry is written in this
style and the best remembered poets in the English language knew it. But as with melody in music, there has
been a jarring move away from the invaluable ability to
create works that earn and are rewarded by affection and recollection in equal measure.

Wow Becky! A really impressive piece. Well thought out with great rhythm and rhyme! I enjoyed it.

Hi Becky, this works great as a performance poem and you give it a nice flowing delivery that makes it come alive. It always amazes me how some people can remember all the words of a poem without looking. Nice one.

I loved this phrase in particular: "I was advised not to euphemize", I, at first, misread it as "euthanize"! There's a whole school of Psychology built upon the interpretation of malapropisms and slips of the tongue! I, like you, too, splatter rhyme all over my work and cling-clang along to iambic pentameter. Anyroadup, very well done Becky.

Thanks for all the kind comments guys! I really appreciate it!

Frankly I thought that it was only a question of time before you were awarded POTW, and a well deserved one with this piece.

Congratulations Becks and so pleased to see one of the rhymers getting recognised.

Well worth the effort to put it into rhyme now wasn't it?

I think most who don't like rhyming poetry are simply jealous that they cannot put two words together.

Great job Becky. Already read this, but I read it again for good measure. ?