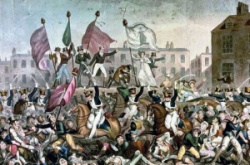 We sat around the table Mam

but none of us got fed,

for the Corn Law has been biting

and we don’t have any bread.

The mill wheels have stopped turning,

so we haven’t any jobs

by the parliamentary nobs.

So we gathered in the field Mam,

with our banners and our flags,

and the soldiers sat in lines

with their brightly coloured nags.

We were organised but unarmed

and adamant we would not yield

as we marched in peaceful protest

There were tens of thousands there Mam

and when Mr Hunt got up to speak

we all jumped up to our feet

and a huge roar went around the crowd

but that was just the signal

that the local magistrate feared.

He called up the Hussars Mam

and sent them in so we’d disperse

and the Air was filled with shrieks Mam

and I don’t know what was worse -

the slashing sabres on our backs,

or the blood that soaked the ground,

or the groans of all the wounded,

or the chaos all around.

There were soldiers in the field Mam

and they all had swords and guns

and they hacked their way through daughters

and they hacked their way through sons,

they hacked their way through husbands

and they hacked their way through wives

and they didn’t care a jot

for the loss of poor folk’s lives.

but I’m lying next to John,

trampled by the horses,

but now the horses have all gone.

There are fifteen other mothers

who will grieve the same as you

over this bloody mess in Manchester.

Pray for the dead of Peterloo.

Thanks for the 'likes' and comments 'WOLers' - I appreciate them - apologies I've been slow in responding - I've been away on holiday. You may be interested to know that this poem is lined up to be set to music this week - I'll post more if it's worth hearing :-)
Ian

The metre here feels like a broadsheet of the Victorian times and has that insistent folk memory to it which adds so much power Ian. A really important message , one that added another brick to our society. I was just thinking of the riots over the introduction of poll tax of the Thatcher reign!

Lovely writing and powerful use of words, especially (as already mentioned) the use of MAM.

The use of the personal - in this case the childlike "Mam"
- enables emotion to click in with added strength and
purpose in this memorable depiction of a human tragedy.
Historically, those were hard times - and the fear of "the
mob" (and often with good reason perhaps) has long been
engrained in the nation's story. The Riot Act had its purpose when public order got - or was threatening to get - out of hand. There's no reasoning with a "tumultuous
crowd" and the reaction can be equally as brutal in its
response aimed at dispersal. Ironic when aware that the
soldier doing his duty was undoubtedly from the same stock as those he acted against. The elite of the day saw threats at every turn from "the common people" and
responded accordingly to preserve their status and
security when folk gathered together in large numbers
to achieve something through collective strength: a
situation that undoubtedly saw the professional agitators
and social rebels at work within (and from beyond) the
gathering.
In the latter respect. little has changed.

a wonderfully composed albeit sad slice of history Ian.

I agree the repetition of mam gives it atmosphere. Wonderfully heartbreaking historical poetry. Thank you

Ian,
You bring this piece of history into an interesting context. This is not an easy task but you have made a good job of it. My endeavours at World War One poems live in the shadow of this poem. Thank you.
Keith

It is hard to capture a historic event in a poem, but you did so really well. And the repeat of "Mam" makes the piece come together as a whole.