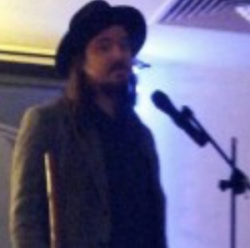 Congratulations to Marnanel Thurman, whose poem 'Edward Lear rewrites "The Flea" by John Donne' is our Write Out Loud Poem of the Week. Here are the responses to our Q&A

I've been writing poetry all my life. When I was five years old, I cadged a school exercise book and started making an anthology. I still treasure that book. Most of the poems are from other people, but there are a few of my own. Here's one of them.

When I was seven, someone gave me a copy of Kaye Webb's anthology, "I Like This Poem". It's categorised by the appropriate age, going up to the teens, but I read them all. This was my introduction to RS Thomas, whose "Welsh Testament" I loved even though I hardly understood it, and Christina Rossetti's "Something I Remember", whose rhyme scheme I gleefully dissected. Alfred Noyes's "The Highwayman" terrified me enough that I counted the number of pages it took, so that whenever I reached that point in the book, I could turn past it with my eyes closed. And Betjeman's "Portrait of a Deaf Man" was what might be politely described as a mindfuck. But it probably helped me through the death of my own grandfather, three years later.

Not many since I became sick, about five years ago: it exhausts me to go out too much. When I lived down south, I adored Dónall and Janice's spoken word night in Guildford, now called 1000 Monkeys, where I cut my teeth as a performer. I play guitar, and open mic audiences which aren't specifically about poetry seem to prefer music. But that's all right, because I can steal a tune and write a poem to it.

The hunchèd camels of the night
Trouble the bright
And silver waters of the moon.
The Maiden of the Morn will soon
Through Heaven stray and sing,
Star gathering.

Now while the dark about our loves is strewn,
Light of my dark, blood of my heart, O come!
And night will catch her breath up, and be dumb.

Upon a Bed of Biting that a Flea was occupying,
a Woman and a tasty-looking Poet were a-lying.
The Poet never heard the Flea arriving with a leap,
as he chattered at the Woman, as she tried to get some sleep,
and the Fearless Flea was sated when he'd fed upon the two
(and their juices mixed inside him, which is more than she would do).

The Fearless Flea has fallen! for the Woman struck him dead,
and felt that in the future she should sleep alone instead.
She made a Memorandum that you're surely ill-at-ease
if you share a bed with Poets or you share a bed with Fleas,
for the Poet kept on rhyming till the rising of the Sun,
(as she privately decided that she never should have Donne.)

The Warmth and Wonderful Poetics of Mary Jean Chan ►

Absolutely wonderful poem, excellent Q and A. Thank you.

Highly original and entertaining. I saw Janice and Donall only yesterday and they remembered you from the Bar des Arts. Congratulations for POTW. Enjoyed the poem a lot.

Congratulations, Marnanel! I'd forgotten how good your poetry is till I read this. Delightful. ?

Congrats Marmanel. I was the only one who recognised your poem at the time of posting. At least by getting POTW it will give others a second opportunity to see its quality.

Easily the best QA’s we’ve ever had!

Read this before it became 'Poem of the Week'. The rhymes are easily manageable, and the theme is quite interesting. Good choice for the week. ?