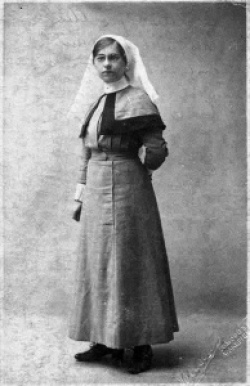 She passed this way and tended to our pain,

stayed by our beds and whispered in our ears,

administered our wounds and eased our fears -

telling us that we would be home again.

Once, in her hands, I saw pendant and chain,

I will remember that for many years,

that made me think of the oncoming rain.

She sent it to her sister days before

the hospital was shelled and her fate sealed.

She was gentle, but never weak or frail,

a young life ended by this pointless War.

the only woman killed at Passchendaele

Nellie was buried at Lijssenthoek Military Cemetery with full military honours the following day. The Last Post was sounded and it is believed that over one hundred officers, four generals and the Surgeon-General attended the funeral. She is the only woman amongst over 10,000 men to be buried at the cemetery.

◄ A Wound That Never Heals

excellent piece of writing as usual ian. got me googling as well, so thanks for that.

You have paid her the best sort of compliment by remembering her in this way.

Ian,
Thank you for such a fitting tribute to another casualty of war. I almost felt as if I were in the ward with her. One of your best and most moving of poems,
Keith