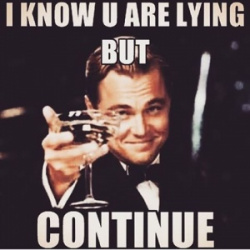 And now I'm pondering why,where did I go wrong at when I was nice as could be to you but that's not good enough for you but let someone from another site or place be out of this world for you and you will jump on it like a dog in heat and freak of naughty boyish nature and then it's throwing me off to the side like I'm shit in your selfless rude boyish who tries to be an old man that is still stuck on that little engine that never could

And how freaking reality bites old boyish men like you