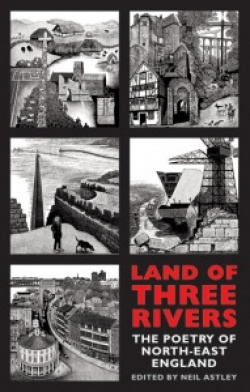 Hexham is a market town in Northumberland, south of the river Tyne, and close to Hadrian’s Wall. It is also the home of Bloodaxe Books, whose editor Neil Astley is renowned for the bestselling anthologies he has put together. His latest is a definitive compendium, with a deep and conscientious sense of history, of the poetry of the land veined by the Tyne, the Wear and the Tees; a book that Astley says in his introduction he had been wanting to produce “for many, many years”.

It begins in the eighth century with Caedmon, the first English poet, and includes latter-day songs of tribute to the region by Mark Knopfler, Jimmy Nail, Lindisfarne and Sting.

Caedmon is the earliest English, Christian poet we know by name, and his 'Hymn', the first known poem in the Northumbrian dialect, was composed to be sung. Bede quotes the Hymn in his Ecclesiastical History of the English People, translated from the Anglo-Saxon by Astley, who also notes that Bede cites an image for earthly life that was given to Edwin, king of Northumbria, as he considered converting to Christianity. Man’s life on earth is symbolically depicted as a sparrow flying through a door in a feasting hall and pausing for some moments before flying back into the darkness.

This sparrow image is reflected in several poems in the anthology, so much so that it could be regarded as an iconic motif. But enough sparrow-spotting - there is so much more to relish here.

WH Auden described the region as his “great good place” - even though he was born in York and grew up in Birmingham - and wrote a number of poems about industrial archaeology, his imagination captured by the remains of lead mines in the North Pennines. There are poems about Roman soldiers by Auden and Kipling; sections from Basil Bunting’s ‘Briggflatts’; Pippa Little’s poems about the Border raiders;  poems about blacklegs, mining disasters, and Jon Silkin’s recounting of redcoats bayoneting striking miners in County Durham; Katrina Porteous’ poems of place and family names; and Linda France’s ‘Acknowledged Land’, looking at Northumberland from 10,000-700 BC.

The anthology does not include biographical details for contemporary poets, but there are often extensive entries about poets from previous centuries. Some poems may not be of the highest quality, such as village schoolmaster Robert Hunter’s ‘Epitaph for Ned Allan’, about a weaver and hunter of otters – ‘The amphibious otter now secure, / on Coquet’s peaceful shore” – but find their place nonetheless. There are poems by Billy Bell, a council roadman known as ‘the bard of Redesdale’, whose surviving manuscripts were rescued by a neighbour after Bell’s widow died, and even several by Lilian Bowes Lyon, a cousin of the Queen Mother, in praise of the “glittering North”.

Robyn Bolam in ‘Hyem’ remembers an accident in the days when trains ran alongside shipyard cranes, and reflects: “When a place puts its hands round your heart / you feel the gentle grip, experience / an inner lift of spirit.” Rodney Pybus in ‘Our Friends in the North’ talks of the “speech-flow / full-guttering from the back of the throat”, and what words do “when they dance,/ like the rhythms that undo / the bindings of the heart”.

The anthology is impressive for the amount of information it conveys, as well as for its poetry. In his introduction Neil Astley acknowledges his debt to “two past chroniclers”, Alan Myers and the poet Rodney Pybus. The latter’s 1966 essay on the poetry of north-east England, which first appeared in Stand magazine, is largely reprinted in the anthology; in it Pybus argues that the north-east’s relative isolation meant that there was “simply no tradition of written, as opposed to oral literature in the region … up to the 18th century the north-east (which had been a kind of bloody no-man’s-land between England and Scotland) produced virtually no writers of any significance”.

Astley pinpoints the mid-1960s as a “pivotal period of renewal for poetry” in the region. Tom and Connie Pickard started the Morden Tower readings in a turret room on Newcastle’s city walls. At the same time Tom tracked down Basil Bunting, and persuaded him to start writing and reading poetry again. Bunting’s first reading of ‘Briggflatts’ was at Morden Tower, which also attracted the likes of Beat poets Allen Ginsberg, Lawrence Ferlinghetti and Gregory Corso to its readings.  Astley adds: “By the time I arrived In Newcastle, in 1975, it had become one of the liveliest centres for poetry in Britain.”

Astley quotes Basil Bunting’s poem ‘What the Chairman Told Tom’  about Tom Pickard’s attempts to gain financial support in the 60s: “It’s not work. You don’t sweat. / Nobody pays for it. / You could advertise soap.” But times have changed. Astley points out that “there are now more published poets, poetry imprints and organisations promoting poetry in the north-east than in any region of comparable size in Britain”. This is because poets are now “given awards for their writing; they are helped to run imprints and encouraged to develop or be involved with community arts projects, assisted by agencies or initiatives supported by government or university funding”.

Yet Land of Three Rivers also pays due heed to the region’s earlier, oral tradition. The anthology takes its title from the chorus of the song John North, by the late folk singer Vin Garbutt, who died in 2017. The popular traditional song The Keel Row, about the large, shallow-draught boats which transported coal from the banks of the Tyne and Wear to collier ships waiting downriver, is also included.  Modern popular songs in the anthology include ‘Tunnel of Love’, Mark Knopfler’s tribute to the Spanish City funfair – due to reopen this year – at Whitley Bay;  Lindisfarne’s anthem ‘Fog on the Tyne’; and Jimmy Nail’s lament for the lost industries of the ‘Big River’, “when coal was king”, his words resonating far beyond the banks of the Tyne.

It feels odd to be writing this review in Surrey, even though it’s where I live, amid the hissing of summer lawns. But I am able to cast my mind back to last November, and the anthology’s launch at the Sage in Gateshead, to the sound of Kathryn Tickell’s Northumberland pipes, plus a thrilling appearance and performance by Jimmy Nail, beside the Big River – certainly the most spectacular poetry launch I have attended. And deservedly so, for this is a big, and very desirable book. I want you all to know.