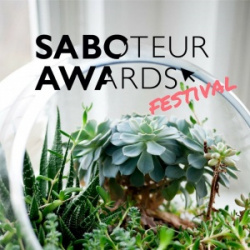 The Saboteur Awards and Festival have been described as the “ankle-biter” of the literary world. Rather than focussing on heavyweight novels and big publishers, the awards celebrate small-budget
indie publishing and experimental works that often sit on the margins, with awards like ‘most innovative publisher’ and ‘best spoken word performer’.

The Saboteurs have been running since 2011, the first two years being focused only
on magazines. They’ve come a long way since then. This year’s format spread out to encompass twelve awards presented at a public ceremony, decided by a record-breaking 7,000 voters, double last year’s number. Also, with funding from Arts Council England, there was a jam-packed one-day festival at Theatre Delicatessen with an eclectic variety of panels, performances and workshops.

The fun kicked off the previous night with readings from Saboteur Awards ’17 alumni at the Vout-O-Reenees launch party. There was palpable excitement in the air when special guest, Hera Lindsay Bird, finally came on stage. Her much anticipated reading opened with Bruce Willis You Are the Ghost from Pamper Me to Hell & Back, published as the Laureate's Choice by the Poetry Business, which primed us ready for the hilarious Leonardo da Vinci and 'Monica from Friends' fan fiction, sharp wit in abundance.

The next day was a whirlwind of workshops honing skills in zine-making, poetry film animation, short-stories and poetry reviewing, and further panels debating everything from galvanizing the margins in contemporary poetry to #MeToo: A Women’s Poetry Anthology and the women behind it.
Nonetheless, it was actually the fleeting brilliance of the bite-size performances downstairs in the café that stole the show.

A showcase of the “shortlistees” began with the explosive energy of Brighton-based Performance poet Susan Evans, later announced runner- up in the Best Spoken Word category 2018. She broke down the artificial barrier between the page and the stage with brilliant and boisterous pieces like ‘Murder on the Gatwick Express’ which had the audience in stitches.

The performances that followed presented in PechaKucha format, with a slideshow background showing 20 images each for 20 seconds, were often unexpectedly gripping. From Ricky Monahan Brown’s meditation on how ‘A Story is a Machine for Living in’ to Nasser Hussein’s reflection on the omnipresence of 'Codes', there was well-researched inspiration. Other items were educational with practical advice, like Beth Cochrane & Ross McCleary ‘How to Run A Spoken Word Night’, elsewhere
aesthetically delightful like Nadia Kingsley & Steph Morris ‘Diversifly’, matching poetry and artwork.

The most powerful poetry performance was Aseptic by Jamie Hale & Emily Robinson, accompanying a slideshow background documenting the progress of hospital admission via ambulance. From the chaos of collage emerged something quite profound. “The disabled body is reduced to medical real estate, pinned to the inevitability of birth and death, constrained by limits of health and normality themselves formed in enabled society”, they tell Write Out Loud.

However, with a non-linear mélange of found sources and searing lyric, including hospital letters, administration documentation, and medical notes, they “reject the notion that to be disabled is to be inherently pitiable”, showing "there is another way to conceptualise ‘the disabled’". From looking at self as other, “property sold at auction”, to “Self as annihilation” or “Self as reclamation”, along with the “sanctification of suffering as self-development”, their endless iterations of self-portraiture demonstrated an impressively rigorous process of scrutiny.

The record number in attendance, almost double last year, was not only thanks to changing to a venue with a greater capacity but also because accessibility was at the heart of concerns. Thanks to Abi Palmer, Accessibility Consultant, there was not only ramped access and accessible toilets, but also a BSL interpreter used for the award announcement ceremony, designated quiet room and abundant seating areas between festival spaces, a communication preference system and plenty of stewards
and volunteers on hand.

In addition to standing for inclusiveness and commitment to new voices within the multifarious 'literary ecology', it was clear that this year the organisers wanted to make the Saboteurs a welcoming and inclusive space for as many people as possible.

American Life in Poetry: The Wall ►