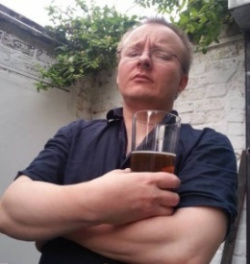 Our final Write Out Loud Poem of the Week for April is ‘Killing the Piano’ by Joe Williams. Joe’s a performance poet from Leeds, and – as you’ll see if you check out his Write Out Loud profile – has quite a few gigs lined up over the next few months. Catch him if you can, and enjoy his answers to our questions below.

What got you into writing poetry?
That was almost entirely accidental. I decided one day that I’d write a haiku every day and post them on Facebook, just for fun and to keep myself amused. I ended up doing 50 haiku in 50 days. After that I stopped doing them daily, but I’d enjoyed doing it so I continued writing more haiku here and there. Some time after that I saw a poster advertising a local poetry open mic, and decided I should give it a go. It all snowballed from there as I discovered a new world of poets and poetry nights that I hadn’t really known existed before, and got more seriously into writing.

How long have you been writing?
The haiku idea came in 2014, and my first open mic was in 2015, but I’ve always written bits and pieces since I was very young. I hadn’t ever done much poetry before, but I’d done a lot of songwriting. I worked semi-professionally in music for several years, mainly as a composer and producer. I’d dabbled in journalism and scriptwriting too, but it was the music that I focused on for a long time.

Do you go to any open-mic nights?
Yes, lots. For me, getting out there and sharing my work on stage, and watching other people do the same, is the most fun part of poetry, and I find it very inspiring. My enjoyment of open mics and other poetry events, and the many good friends I’ve made because of them, is without any doubt the main thing that got me sucked in to poetry and made me want to pursue it seriously. My most regular haunt is Word Club in Leeds, and you’ll find me there almost every month. I generally try out my new material there, and at WordSpace, another monthly night in Leeds. I try to get out to as many different events as I can, both locally and further afield. I’ve been doing a lot of guest spots over the last few months as I’ve got a book to promote, and I’m hoping to continue doing that, so if anyone wants to book me for something...

Who’s your favourite poet? And poem?
I can’t pick just one. The amount of local talent we have in Leeds and nearby is incredible, and I feel very lucky that I can see so many great poets on my doorstep. People like Gill Lambert, Alicia Fernández, Mark Connors, Ian Harker, Sandra Burnett - there are loads of others I could mention. I also admire people who are able to combine strong writing with a great stage presence or persona, which is something I strive for myself. Louise Fazackerley and John Hegley are a couple of examples, but again, there are lots I could mention.

You’re cast away on a desert island. What’s your luxury?
I’ll have an infinite supply of Laphroaig 10-year-old single malt whisky, please, and don't bother coming to rescue me.

Killing the Piano
by Joe Williams

We tried to save you with small ads.
Free to good home, must collect
but nobody called.

We tried schools and churches,
community centres,
but none were prepared to accommodate you.
No room for the past,
no use for tradition,
and each back turned
was another key condemned.

Once we dragged you a hundred miles north,
and later a hundred back,
my faithful friend as I learnt how to play,
from Three Blind Mice
to Für Elise and the Nut Rocker.

But for years you stood,
lid down, barely touched,
except by the clumsy fists of children,
bashing a blind fortissimo,
untroubled by rhythm or melody,
unaware that every good boy deserves favour.

For years you stood,
an obstacle,
an inconvenience,
silently slipping out of tune.

It fell to me to strike the killing blow,
consign you to the fate we’d tried to swerve.
Behind the crack of splintering walnut
I could hear a heart
breaking.

Nice one Joe, and good book hope to see you soon ?

Superb poem Joe I really have an image of a trusty old piano. We used have one in our house that one of our children was supposed to learn to play but it never happened and it was used for a dumping ground for anything and everything.
Nice one

Congratulations Joe on Poem of the Week. It is always a pleasure to read your work here on WoL and this one is certainly deserving of the headline treatment. Keep 'em coming! And good luck with the book.

There is something about musical instruments, that, although inanimate they do have a voice! Always a sad day when one is destroyed, captured well here Joe.

It's a pleasure and an honour to be chosen for this. Thank you very much. I'm glad people enjoyed the poem ?