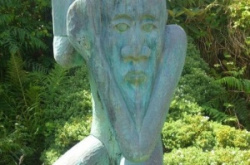 The new Write Out Loud Poem of the Week is ‘Dear Sad Friend’ by Ruby. In her Q&A responses she reveals that she began writing poetry around the age of 12, and although she calls herself quiet and introverted, has performed her poetry – with limbs trembling - at an open mic event organised in her college, and has also attended an open-mic event at a cafe in Shillong, in north-east India. She adds: “I have always found respite in writing!”

What initially got you into writing poetry?

I was in my third grade when I started scribbling and phrasing little words. I found it quite amusing in a way that I would re-read my writing and be happy with it. I started writing, as for real poetry, when I was 12 years old. I used to write poems in English and Bengali (an Indian language) too. My childhood had been spent most of the time staying indoors. Being an introverted kind, I strictly avoided social situations. Sometimes I feel that I could feel any emotion, be it my own or others in a deeper scale. And most of my poems are all attached to what I had seen in life and felt in me or others.

I had been writing since seven years, as I had told. I started writing poems when I was 12. I used to write short stories when I was in my 11th grade. I have always found respite in writing!

Have you ever performed your poetry at open-mic nights?

I am a quiet, introverted girl and again that I would be quoting “I strictly avoided social situations”. But I had my start participating in an open-mic event in my own college organised by ‘Wanderlust’, a group of our college students who do shows like chat shows, plays and all. I was nervous as usual (whenever I face an audience). I performed ‘Dear Mama’. I remember how I felt vividly my knees trembling and I felt lucky that my voice didn’t show tremor after I finished. And quite a few months back I attended an open-mic night at Dylan’s Café in Shillong (India). I chose to go as an attempt to erase the fear that I had while performing in public.

Who/what is your favourite poet or poem?

I don’t really have something to be called favourite. But Margaret Atwood is one of my favourites. I haven’t read much of Lang Leav but I do like her writings. And I love much of the poetry on Write Out Loud.  I would love to thank the poets who had complimented my writings since I started writing here.

What had betided you?

Your orbs so dark

And lucent in gleaming liquid –

Once that it had met people’s eyes,

The other second that had drifted

Mistakenly bumped into each other

The next moment I flipped my hair

To catch sight of you;

I followed you to behold your face:

That scars all over you

“What had betided you?”

You’ve got a dear friend here!

'You pair them, two by two, you marry the socks' ►

I came back to this to recheck the first line: 'What had betided you?' It is one of the best lines I've ever read, and especially effective as an opening. And 'I flipped my hair/To catch sight of you.' - an image that stays with the reader in its powerful simplicity of such a universal gesture. It conjures equally so much artistry in the idea of 'hiding behind my hair', such an ancient, womanly ploy.

Margaret Atwood is a powerful writer, a superb icon to admire.

Thanks John Marks..Means a lot!

You have oodles of talent Ruby. Congratulations! I echo raypool's perceptive comment, that your work "has a winsome quality": some synonyms of winsome are: 'appealing, engaging, charming, winning,endearing, enchanting, captivating, fetching...' all of these epithets (and more) suit aspects of your work. Keep writing! John

I find real sincerity of feeling and an innate elegance of expression. The combination is a writer's dream. Well done to you and to the WOL person who picked this work.

Thanks a lot Ray!

Your writing has touched a chord and resonates simply and truthfully Ruby, it has a winsome quality, an almost cinematic moment registered. Glad to see you as POTW.

Thanks Martin for your encouraging words!

A very nice poem Ruby. Don't be afraid of your talent. Keep writing. It is refreshing to see new poets emerging from all corners of the globe. We all get uncertain and scared at sharing our writing . First time I turned up to a poetry event I couldn't even find the door and had to wait to the next month.
Nice one

Some interesting turns of phrase in this poem; nicely expressed.

All the best,
Suki

Thank you so much Colin, David and Graham. Your comments have encouraged me a lot.
Thanks again!
Ruby

Well done Ruby. The wonder of Write Out Loud means we all get to read work by poets from all over the world. Poetry has truly become a global community since the advent of the internet - whether here or on blogs or Twitter or elsewhere - and that has to be a good thing. I've been enjoying your recent posts including the three 'Dear...' poems - my personal favourite being 'Dear Love' - so I'm pleased to see you getting headline billing. Good luck with your writing and performing. I remember my first time and my knees shook like some cartoon character so you're not alone in that respect. All the best, Colin.

Loved it the first time I read it. Interesting terminology in some of the expressions but they fit well.