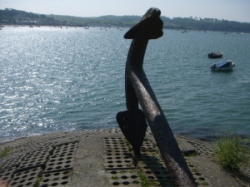 The new Write Out Loud Poem of the Week is ‘sea-faring’ by Zach Dafoe. In a detailed interview with Write Out Loud he talks of writing about “urban scapes, waxen-wood karaoke bars, boxing rings, hospital beds”. He has started reading at open mics in Edmonton, Canada, but says: “I’m not a very good spoken word performer just yet … I’ve been funnelling pieces out and hammering them down to be spoken to an audience outside of the context of my own head”.

I have been writing or trying to in various capacities since junior high -- grade 6 or 7 - at around age 12 or 13. I've always found experimentation with words and exploring the sounds in my head as something I have an inclination towards, but never really had the emotional stamina for anything long. I've always appreciated the fleeting nature of poetry, though in my earlier 20s dabbled in short stories and novellas.

For me, writing is kind of like a compulsion. I'll wake up in the middle of the night with a chain of words that snaps together, then write something around it. I'm lucky enough to be living in the digital age because I feel like I can never write down what feels best or most apt as it comes - I can never move my hands fast enough. On the phone or on a blog or to a message to a friend that's attempting to wrap around a particular scene, feeling, connection, character, or idea - I have to type fast or I lose the words and the concept comes out as watered-down.

It's most always been a compulsion, starting with experimentation. It's always been my medium of choice.

How long have you been writing and how would you describe your style?

I kind of jumped the gun and answered this one above, but it's been a long while for me. Sixteen years. As for style? It varies, but I tend to explore the same themes and favour certain words -- a quick stroll through anything up on Write Out Loud could tell you that. Urban scapes, waxen-wood karaoke bars, boxing rings, hospital beds, but more importantly than where is always going to be the what: capturing the fleeting eyes-shut, thousand-year deep feeling of those settings. I am very emotional with my writing, and there's a clear divide between what's solely literary and what's meant for spoken word. I'm not a very good spoken word performer just yet, and I think that's cause for the divide. I SHOULD be able to make it all sound good, but I'm not quite there yet, so I've been funnelling pieces out and hammering them down to be spoken to an audience outside of the context of my own head.

Yes. There are a few here in Edmonton and my S/O has convinced me come December to start performing. The Breath in Poetry Collective is an extremely accepting and encouraging space. We meet at a cafe 19.00-21.00 , and there's a full spectrum of talent there. I really appreciate it, as a space and community. Anyone reading this who's THINKING about starting to share their work (terrifying as it is), please go and do it. It will only make you grow as a writer and as a person.

My favourite humans on Write Out Loud are Colin Hill and Stu Buck. A lot of textures and feelings and phasing, pacing, experimentation - really shifted me into different states of mind to read what they write, and they do so very differently. Those two and Jackie Phillips have been really supportive in reading me since day one, and it's really helped keep me on track. We all need a little validation now and then.

In terms of other poetry and literature in general, I'm actually remarkably under-read. Locals: Liam , Gwendolyn, Marina of Breath in Poetry Collective (I can't remember their last names – sorry, guys). Famous people: Leonard Cohen … I feel like I've really been put on the spot here, but I promise there's more.

You’re cast away on a desert island. What's your luxury?

My luxury? I'd love to say it's something like cigarettes or a single bottle of cooled gin, symbols of the equal parts of the love and lamentation that is living. I would love to say that, but more likely, I'd settle for a case of cherry Coke. I'm a sucker for sweet things.

setting your watch to a belly of a dog

springs and sprockets carried on a Crimean surf

cards with men wearing sleeves stamped with mermaids, anchors: momentos and hexes and the names of lovers stranded by the low tide

like us: dried up and bottomed out,
stamping timesheets , winking at dirty jokes
eating dinners in silence as the hull whistles
thru bullet holes.

'Who has the courage to look out to the east again at someone else's sun?' ►

an epic mind at play - constantly active and questioning, always pushing at the boundaries and never content to sit back and accept the written norm. Yet there are also nods and winks and acknowledgements of the great sagas from history. Your poems imo make for a great response to those early writers. The Homer of Edmonton? Okay, maybe that's taking the compliments a bit too far! Well done on POTW.

zach this is just wonderful and a more than fitting winner. i have always loved your writing, the way it mixes styles and your use of striking visuals, so i am really glad to see you up here where you belong. thanks for the sout-out too, it made me happier than most would realise.