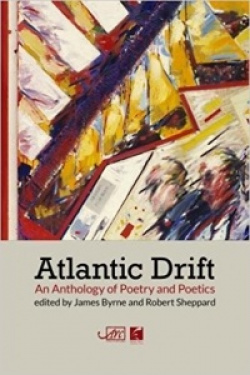 Subtitled ‘An Anthology of Poetry and Poetics,’ this is an important anthology not just for the poetry in it, but for the thinking about poetry within it as well. Most people, I suspect, don’t sit down and ask themselves what they do and why when it comes to the writing of poetry; they largely do what they do because that’s what they’ve learnt a long time ago to think of as poetry.

“Poetics” here is described as “a speculative, writerly discourse” which focuses on the creative process as works are written or are about to be written. It comes in many forms, from the manifesto to something like Jerome Rothenberg’s A Note On The Proceeding, which simply explains what he is doing in the set of poems extracted from this anthology.

A couple of the poets embed their “poetics” in their poems; thus John James writes in ‘A Theory of Poetry’:

to make your lines

running from one side to the other

It’s actually a very amusing poem about how he personally puts his poems together and includes the things that are important to his poems, such as:

get as much as possible into

there you will discover

& in a particular place

these people are the others

without whom you would not exist

Despite coming across as a set of instructions, this is not an attempt to tell anyone else how to write poetry; and a lot of the poetics statements here are more about the writers’ own procedures than anyone else’s.

The poems in this anthology represent a mixture of American, Canadian and British innovative writing, and if nothing else, they reveal the continuing variousness of experimental poetry. The poems vary from the collaged discontinuous poetry of Allen Fisher to the poetic prose/essay of Claudia Rankine’s brilliant and moving Citizen, winner of the 2015 Forward prize. Some of it is difficult to quote from, because of its formally intense and accumulative techniques. But here are a couple of extracts, from SJ Fowler and Zoe Skoulding:

that’s why they’re those above,

who can’t be loved,

asking why can no one love me?

this evening is a letter of correction.

Not a river but its

level in the glass note

movement and a sound

half in the performance

where I ran to you I

while tarmac shines in rain

the channels you don’t touch

well up on tomorrow’s

tongue to flower there don’t

leave or was it this way

that now I’ll run from you

This book is no doubt challenging for many, but I think is a good way to examine not just the various ways innovative and experimental writers explore the edges of what is possible in poetry, but also the way they think about what they’re doing and why they do it. Some of the poetics are couched in rather academic language (Allen Fisher, for instance, borrows terms like “decoherence” from quantum mechanics) but others are much more approachable and, with a little work, can also be enjoyable.

There are some poets I’m glad I was introduced to, such as Bhanu Kapil and M Nourbese Philip, and others I’ve enjoyed for some time such as Chris McCabe and Geraldine Monk. Some of it is more accessible than others; but I learned a lot from this anthology and expanded my mind in interesting ways. The poetics made me think of my own poetic strategies. I’m glad to have this collection.

Being inclined to the experimental myself, this may well become an essential book for me, but I recommend it to anyone who wants to think a little outside the box of contemporary poetry, and to explore different ways of writing this various art we call poetry.

Thank you for this review, Steven. You have long been a great advocate of pushing the experimental boundaries, and this sounds like a good book to help us do so.

it reminds of a tutor I had once, about whom the group complained that his lectures were difficult to understand, to which his riposte was, in terms: if I just use the language you already know, how are you going to stretch yourselves to learn anything new?