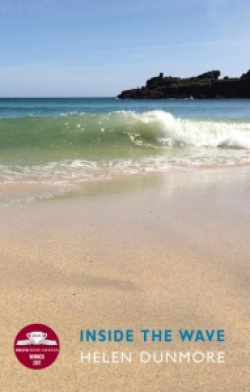 Helen Dunmore’s final poetry collection Inside the Wave has won the overall £30,000 Costa book award, it was announced on Tuesday. The poems within Inside The Wave are described by publisher Bloodaxe as being “concerned with the borderline between the living and the dead – the underworld and the human living world.” The Costa judges called them "an astonishing set of poems - a final, great achievement".

Helen Dunmore died of cancer earlier this year at the age of 64. She was a novelist, short story and children’s writer, as well as a poet, and won first prize in the National Poetry Competition in 2010 with ‘The Malarkey’.

She is only the second writer to win the prestigious award posthumously, following Ted Hughes who won in 1998 for Birthday Letters. The poetry category last won the overall Costa prize in 2012, with Jo Shapcott’s Of Mutability.

The chair of the judges, Wendy Holden, said Inside the Wave was “a modern classic ... even though it was written while she was dying, it was very life-affirming".

Dunmore’s win will hopefully help place poetry back in the public eye, “particularly as poetry is at a very interesting place at the moment, as it is very hotly debated what poetry is, now, whether it is slam poetry or, in inverted commas, highbrow,” Holden added.

Helen Dunmore’s husband Frank Charnley and their children Patrick and Tess went on stage to receive the award, at the ceremony in London on Tuesday night.

Next stop Wigan? Write Out Loud at the Old Courts tonight ►

Sad, but wonderful for her family that she has won this posthumously.

I am sure Ms Holden was only reflecting the traditionalists' view, but it seems rather dismissive to suggest that there is "slam poetry" and "highbrow" - for which read "proper poetry". Slam is but one style of poetry event. Some folks have no appreciation of the range of types, style, genres and purposes of poetry as it is currently practised in the UK and elsewhere, seeming to operate in their own little published poetry = proper poetry bubble.

I would argue that it is a legitimate form of 'publishing' for an individual to stand up for the first time in front of people they don't know, hands shaking, to read their own words out loud for the first time. It's an alternative route into poetry, not the poor relation.

Forgive me, Ms Holden if I am misconstruing your remarks.