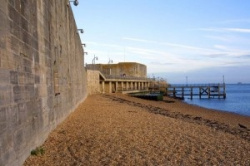 The new Write Out Loud Poem of the Week is ‘How to Catch a Fish in the Solent’ by Helen Elliott. The pier in the poem is in Old Portsmouth, close to the Square Tower, which is a popular poetry venue. Helen began writing poetry after an intensive course of counselling. In her replies to our questions, Helen says that her poetry writing has progressed to the point where “I write because I want to, not because I need to”. Her favoutrie poem is by Don Paterson, about the death of a dog,

I have been writing for just over three years now. I started after a very intensive course of counselling that seemed to open up the floodgates, so to speak. That first year was relentless, I became a bit obsessive about it and was writing a poem a day! Looking back, I think that the whole process initially was like a continuation of therapy for me, and I was afraid that if I stopped, then I would move backwards. Luckily, it sorted itself out and I was eventually able to look at poetry in a different light, getting to know it by reading more and writing less. It's nice to be in a position now where I write because I want to, not because I need to.

Yes, I do go to open-mic nights, but not nearly as much as I'd like to. There is a great poetry group here in Portsmouth called Tongues and Grooves, with very supportive and talented people, who really encouraged me when I first started. That group has evolved in recent months and the open mic element of it has been replaced. There are a few other open mic nights popping up throughout the city but I am yet to attend. I am a creature of habit, so it may take me a while. I have also read at a pop-up arts festival that is held each year at the fabulous Square Tower, in Old Portsmouth. The Mayfly festival is a one-day event, combining music, art and poetry. It is always well attended and I am always thrilled when I am invited to be a part of it.

Oh that's a tough one. The first thing that I look for in a poem is an emotional connection. Irrespective of form, structure etc. I just want it to make me feel. So for that reason, I will go with Don Paterson – ‘Mercies’ from his 40 Sonnets collection. That book changed the way I look at poetry for sure. The formal stuff comes more naturally to me, but the aim is to bring it bang up to date. Paterson manages this like a master in this book and this particular poem stuck with me, so much so that I can almost recite it! Also, I'm a dog lover, so anyone who can show such compassion to an animal is a hero in my eyes.

Would my dog be classed as a luxury?

HOW TO CATCH A FISH IN THE SOLENT

Aim to reach the hot walls before dawn

to bid the moon farewell and greet the sun,

salute the sailors on their morning run.

Then wave your arms at islanders upon

the St Helen. As soon as she is gone

unpack your bag, your tea and Belgian bun

to keep you sated till your work is done.

This fishing lark is quite a marathon!

Then once you're fed and watered get your rod

and take a gentle stroll up to the pier,

don't worry if you feel a little odd -

the other fishing folk are friendly here.

Explain that even though your technique's flawed

Your cool bag is, in fact, filled up with beer.

Remembering a ground-breaking book of poetry, 50 years on ►

As Graham said above, the poem has charm. Also the reader is transported immediately to that experience. We can imagine being there. Reminds me of the days when I used to go fishing in Portugal except we took wine. Well done!

Nice one Helen! ? Lovely poem and a very worthy winner. So glad you're back with us for a while ?

Very good I really enjoyed it.

Helen,
Nice to read you again...Away a bit now...but I like the way this little fourteen liner nods to form as it strolls along.

Helen, this is a lovely poem. It fully deserves its place here as POTW. Reminds me of fishing trips with my Grandad ...
: ) x

Glad I caught this in the week. My hearty congratulations on being selected as POTW
Well done Helen

Thank you to you all for such supportive comments and to the powers that be at WOL for choosing my poem as POTW. It is an honour.
This was the first place that I ever posted my work, and although I have been absent in recent months, I always find myself returning.

Congratulations on POTW Helen and good to see you back posting on WoL again. Like Graham I missed this first time around so I'm pleased to catch up with it here. I know from reading your previous work just how much thought and effort you put into each piece and the quality really does shine through. I love those three opening lines - so important to grab the reader's attention and never let them go. All the best, Colin.

Congratulations on winning POTW. Nice one!

Surprised I missed this charming piece last week (holiday) but what a beautifully written poem. Delicately balanced and a worthy POTW.