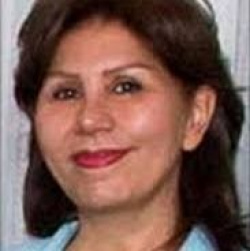 An Iranian woman who began writing poetry in prison has been named 2017 International Writer of Courage at the PEN Pinter Prize ceremony at the British Library.

Mahvash Sabet was freed last month, after being imprisoned for almost 10 years in Iran. She was one of the group of seven Baha’i leaders known as the Yaran-i-Iran (“Friends of Iran”), and was detained in 2008 with six others, for their faith and activities related to running the affairs of the Bahá’í community in Iran. They were held for 20 months without charge. Their trial finally began in January 2010, on charges including espionage, propaganda against the Islamic Republic and acting against the security of the country.

On 18 September 2017, Sabet was the first of the group to be released from prison, having served almost a decade in detention. Following her release, she has issued a public call for the release of her six fellow detainees.

Mahvash Sabet began writing poetry in prison and a collection of her work Prison Poems, adapted from Persian by Bahiyyih Nakhjavani, was published in the UK in 2013. Nakhjavani said in the introduction to the collection: “Her poems allowed her to speak when words were denied, to talk when no one was listening to her.”

Michael Longley was chosen as the 2017 PEN Pinter Prize recipient in June. He said: “I am humbled to share the PEN Pinter Prize with Mahvash Sabet, an Iranian poet condemned in 2010 to 20 years in prison simply because of her Bahá’í faith and her work on behalf of the Bahá’í community: a songbird trapped in a cage.

“Mahvash is at heart a lyrical poet who sings the beauty of the world. Her imagination is rhapsodic. Her poems want to soar. I rejoice that she has been released from prison. Her incarceration by the Iranian authorities was a sin against the light. The power of dictators to silence and imprison writers continues to ‘put all heaven in a rage’.”

And those who hold power in places like Iran continue to
insult the term "humanity" - abnegating their duty
to use that power for the best of all purposes...the benefit
of all of their people.