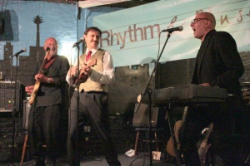 It was TS Eliot’s birthday on Thursday. He would have been 125, Little Machine’s Walter Wray reminded the audience at Rhythm and Muse,  a regular poetry open mic and music night at the Ram Jam Club, in Kingston, south-west London. The trio interspersed their uplifting performance of poems set to music with quiz questions for the audience to ponder.

Did you know, for instance, that the 1970s jug band Mungo Jerry owe their name to one of Old Possum’s Practical Cats? Or that TS Eliot himself was a dab hand on the mandolin? Little Machine – Chris Hardy, Walter Wray, and Steve Halliwell – specialise in honouring poems they admire by turning them into fine songs and arrangements. Thus Carol Ann Duffy’s ‘Mean Time’ now has an early Dire Straits vibe, while Gillian Clarke’s ‘Overheard in County Sligo’ – “I married a man from Co Roscommon / and I live in the back of beyond” – has been turned into a country and western lament. It’s very respectful, but it does raise a smile.

A tour de force was undoubtedly William Carlos Williams’ ‘The Red Wheelbarrow’.  Another highlight was Little Machine’s passionate rendition of ‘Jabberwocky’, reminiscent of the earnestness of prog rock bands from long ago, climaxing with several rousing choruses of: “Frabjous day! Callooh! Callay!” .

They concluded with Byron’s ‘We’ll Go No More A’Rovin’, as Wray said, “ a song about the legendary sex tourist of the early 19th century, who was tired of it all at the age of 28”. The trio, who played earlier this year at the Saboteur awards, were returning to the Ram Jam Club, a great performing space behind a pub, and were frabjous; the kind of outfit that ought to be appear more often at poetry festivals. Organisers, don’t delay!  Greg Freeman

Thanks for bringing Little Machine to me. Somehow I had never heard them until now. Superb interpretations of poems that had become almost too familiar, brings new life to them.

Went with Greg, this was the second time I've heard Little Machine. If you see an event where they are appearing well worth the trip.

I'd just like to add that since writing the above I've been playing Little Machine's second CD Madam Life, that I bought last night, and suddenly heard their version of Wilfred Owen's 'Anthem For Doomed Youth'. Brought tears to my eyes.