Milestone moment as Write Out Loud's competition anthology is unveiled 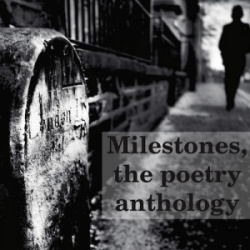 It was the very satisfying end of a journey on Saturday at Long Compton in Warwickshire, with the grand unveiling of Write Out Loud’s Milestones poetry competition anthology. The location was the agm of the Milestone Society, on whose behalf we had organised this contest, which was judged by legendary Liverpool poet Brian Patten and attracted well over 500 entries.

A number of poets, including under-16 winner Martha Blue, had travelled many miles with their families to attend. They were welcomed by Jan Scrine of the Milestone Society, and introduced by Write Out Loud’s chief executive, Steve Pottinger.

Why Long Compton? Well, the poetry competition was part of a Milestone Society project called Finding The Way, aimed at finding and restoring some tall cast iron poles that were originally surmounted by large direction boards showing the distances to London, Stratford and Long Compton, along the route of the 1730 Stratford to Long Compton Turnpike. Previously this route was almost certainly the one travelled by William Shakespeare from Stratford to London, on his way to fame and fortune.

One of the restored mileposts, pictured left, is now outside the village hall in Long Compton, where the agm was held – not far from the ancient and mysterious Rollright Stones, that attract many visitors in this part of the world. Other mileposts have been recovered and restored, including one that had been discovered in several pieces after a roadside hedge had been flailed to within an inch of its life.

Steve Pottinger read the poems of the three winning adult poets – John Baylis Post, Stephen Devereux, and Caroline Gill, who were all unable to attend, although third-placed Caroline sent a message that was also read out by Steve. Four shortlisted poets who appear in the anthology - Susan Utting, Cadi Carter Brown, Dave Morgan, and Mariama Ifode – provided entertaining and poignant readings. 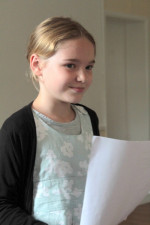 The highlight of the afternoon was the readings by the three successful under-16 poets. Commended Iona Mandal (‘Milestones’) introduced herself brightly and confidently, and Aurora Blue (‘Malcolm’) also read well. Then came Aurora’s sister Martha (‘Turning Point’), the under-16 winner, pictured right, reading her poem that judge Brian Patten has described in the anthology as “thoughtful and sophisticated”. A proud moment for Martha, her family, and, somehow, for us all.

Milestones, both literal and metaphorical, can represent a moment when it’s time to take stock, stop for a rest, and maybe even decide to take another path. It’s a theme that inspired well over 500 poets. Thanks to all of them for entering the competition, to the Milestone Society, and to those at Write Out Loud who worked so hard on this project.

Email  info@writeoutloud.net to buy copies of Milestones, the Poetry Anthology, The price is £6.50 plus p&p.

Good to see you there, Dave, and glad it turned into a welcome break. I think it's fair to say that your anthology poem, 'Three score and Ten: A Life of Biblical Proportions', went down a storm with the Milestone Society members ...

Very enjoyable afternoon Greg and the perfect captive audience. WoL acquitted itself very well in the company of
those avid historians.Really had a good couple of days and in fact followed the 'milestone way' from Long Compton to Stratford clocking all six mileposts on Sunday. A genuine I Spy experience.