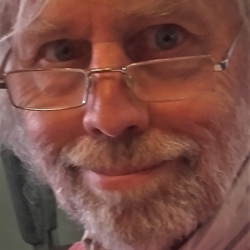 The £500 Milestones competition run by Write Out Loud on behalf of the Milestone Society has been won by John Baylis Post with his poem ‘Track’. The winning poem was described thus by the competition judge, famed Liverpool poet Brian Patten: “I was interested that the writer of this poem was instinctively drawn to the Romans. The Latin mille passus means - of course - one thousand paces. The endless foot-slog by weary Roman soldiers provided one of our most ancient and abiding units of measurement. (Marching across unfamiliar territory, Roman infantrymen would often drive a stake into the ground to commemorate each thousand paces covered.)

‘Track’ explores the downside of this quantification, evoking how the relentless march of so-called civilisation obliterated centuries of peaceful footsteps and sacred places with its 'punishing certitude' and trampled on - or marginalised - the natural world. Deftly, the poet segues into more recent invasions, as high streets capitulate to Costa Coffee shops. The form of this poem is perfect - as measured and disciplined as the soldiers' footfalls, and as unstoppable in its drive to a devastating conclusion (progress 'without strategies') as any conquering army.”

John Baylis Post lives on the Beara peninsula in West Cork, Ireland. He has previously, at various times, been a medieval historian, a wages clerk, a manuscript curator, a Labour Party election agent, and head of a district general hospital. He has been writing poetry, “on and off (mostly off),” for upwards of 50 years.

He said: “I've been longlisted and shortlisted in various competitions over the last few years, both in Ireland and in England. This year I've won the Ó Bhéal Five Words and the Segora competition as well as the Milestones competition.  But previous successes don't make new ones less sweet!”

before the Romans, before the punishing certitude of things,

before hobnails marched reason through the passed-down stories

past the king’s wedge-grave and the industrial estate,

still asphalted, here and there, with crazed forgettings.

Along the verges, the shit-sweet smell of old triumph

dissipated into the hayfever of rosebay willow-herb.

It runs like an autopsy scar on the belly of the country,

Moss and indifference encroach casually over the last beliefs,

without strategies. There’s no tramp of pennywort as it marches.

Runner-up and winner of £100 was Stephen Devereux, who grew up by the Suffolk coast but has lived and worked in the north-west of England for many years, with his poem ‘Cavalry Cemetery, Romania’. Stephen said of his poem: "It is based on a memory of travelling round Romania during the Soviet era. The poem was, in part, a response to the grotesque glorifying of the 100-year anniversary of the Battle of the Somme." Brian Patten commented: “My choice for second place also has a military theme: a poignantly rural cemetery in Romania where the thirty-three headstones of former cavalrymen become their own milestone of sorts - a symbol of an era where losses could still seem 'romantically fatal' and individual graves had not yet given way to anonymised 'pits' of the fallen. I love the restraint of this poem, its delicacy and its moving evocation of the physical reality of each of the impossibly young idealists lying long-cold beneath the flowers.”

Third and £25 winner was Suffolk-based Caroline Gill, with her poem ‘Penwith Finger Stone’. Brian Patten said: “This poem focuses on a literal milestone in Cornwall, its small-scale granite simplicity set against the vastness of the county's better-known stone landmarks and monoliths ('Zennor Quoit, Robin's Rocks, Great Zawn, Gurnard's Head. . . ') that frame the poem like a shipping forecast. What stands out for me here is the awe of the narrator, his or her fascination and respect for the monument - and the way in which tiny details (was the engraver left-handed?) draw the reader ever closer to the physical reality of the stone and its meaning.” 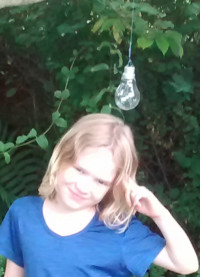 Winner of the competition’s under-16 section and £100 prize was Martha Blue, pictured, with her poem ‘Turning Point’. Martha is aged nine, and lives on the Staffordshire-Cheshire border. She has been writing poetry for about three years. She won a commendation prize in the 2016 Buxton poetry competition, and is a co-editor for the junior section of the Arthur Ransome Society magazine.

Brian Patten said: "In this poem, the ‘stone’ of the competition’s theme is a pebble discovered on the beach; the ‘milestone’ is the writer’s sudden awareness of his or her lifelong fascination with detail, particularly within the natural world. I like the way the poem counterpoints the world of scientific enquiry (‘microscopes and magnifying glasses’) with lyrical description of nature in its own environment, and also the way that the questions nature stimulates in the writer (why can’t the butterfly be heard?) lead to fundamental questions about mortality. The stone’s colour reminds the poet of the greyness of his or her dead great-grandfather. But, more tellingly still, it is a reminder of the permanence of nature:  the poet eyes the ‘unblinking’ eye of the stone, and accepts that only the stone will continue to stare ‘forever’.  That is the real ‘turning point’ in this thoughtful and sophisticated poem."

Another beach walk, combing, looking for something to catch my eye, why…?

For the first time I find myself

aware that I was always looking closely at things.

Like this pasta piece, curled tightly and hard sharp at the ends.

But why can’t I hear the black fly

when it gets stuck in the spider’s web, while I

Why can’t I hear the butterfly, silently

counting the hushed beats of its beautiful wings?

the same all around, a mini boulder,

ring around its neck;

Its eye caught my eye, unblinking,

each at each other, one of us forever.

The competition was on the theme of milestones, physical or metaphorical. The Milestone Society, established in 2001, has gathered records of over 20,000 milestones, guide posts and tollhouses still existing in the UK in a mission to tell the world about what these represent, the history of our highways and the people who travelled along them.

◄ Find out more about the Milestones winners - and their poems

Fantastic poem by John - 'crazed forgettings', 'autopsy scar on the belly of the country'. And Martha - 'Each at each other, one of us forever.' Worthy winners both. Well done.

Wonderful winning poems, big congratulations all! So happy to be appearing alongside you in the anthology as a shorlistee ? xx