Poetry International turns 50 with weekend of global voices at Southbank 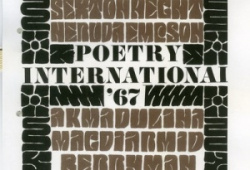 London’s Southbank Centre is celebrating 50 years of Poetry International, which was launched by Ted Hughes in 1967, with a series of events featuring global voices at the Royal Festival Hall over the weekend of 14-15 October.

A showcase of 10 young black and Asian poets in the UK - Raymond Antrobus, Yomi Sode,  Degna Stone, Momtaza Mehri, Leo Boix, Ian Humphreys, Will Harris, Omikemi Bryan, Jennifer Lee Tsai, and Victoria-Anne Bulley – will celebrate publication of the Bloodaxe anthology, Ten: Poets of the New Generation, edited by Karen McCarthy Woolf. This book is the culmination of work by a national organisation founded by writer and activist Bernardine Evaristo, that has played a key role in raising the level of diversity in major British presses from less than 1% to 14% over the last 10 years.

There is a full programme of talks, panel discussions, performances, workshops, installations and free activities over the weekend, all part of the London literature festival.

◄ Remembering a ground-breaking book of poetry, 50 years on