'The more painful and scary to write ... the more important it is to communicate' - Henry Normal 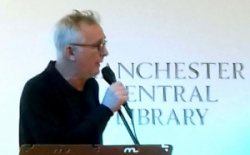 The writer, poet, TV and film producer Henry Normal – the man behind Mrs Merton, The Royle Family, Gavin and Stacey, The Mighty Boosh, and Alan Partridge, to name but a few - has launched his first new poetry collection in over 20 years, Raining Upwards. Earlier this year he also published Travelling Second Class Through Hope, containing 70 poems selected from his early works. Dave Morgan interviewed Henry Normal before the launch of his latest collection last Friday at Manchester City Library:

Born a poet or made a poet?

Good question. I was born with water in my lungs so my entry into the world was a little fraught. I've always felt a disconnect from purely living in the present. I may be autistic or poetically predisposed. My mum died in a car accident when I was 11 so from then on I withdrew from any gregarious bent and stood on the edges of crowds trying to understand the world.

Few poets are economical with words yet use them effectively to capture attention, provoke reflection, ground us. Any particular influences?

Piet Hien is a great influence for brevity. One of my favourites of his poems is 'Love is like a pineapple, sweet and undefinable’.

You are no slave to rhyme or form. Are these poems written to be read aloud/performed? Is that an afterthought/by-product?

It usually starts with a feeling that I try to explain to myself and whether that turns out to be a page poem or one that people can understand enough on first hearing to lend it to performance is chance.

Self-disclosure seems to come easily to you. Is that so?

All I can contribute to the vast body of communication that already exists and is constantly bombarding us is an expression of my perception of the world. As artfully and as truthfully as possible in the hope that it relates to someone else in some way.

Conscious change of theme and style or natural evolution?

My world has changed over the last 30 years and my expression of the truth of my experience changes with it. The main object is to be as truthful as possible. The more painful and scary to write, usually the more important it is to communicate.

Travelling Second Class Through Hope seems to be pretty frank about failed relationships. Trying, and failing, to make light of failure. Raining Upwards seems to be about seizing the moment. Awareness of the positive in the present. Has the reader missed the point?

I like that you've taken that. It's not for me to tell you what to make of the collection. It's made up of almost one hundred separate poems, each written individually from a different stimulus. I'm sure there are themes of loss, human frailty and finding a place in nature and science but I'm too close to be definite. I love knowing what others make of the collection.

There are many killer titles and last lines. What comes first, the title or the last line?

Title usually comes early. Sometimes the first line comes first.  Often I've no idea of each next line until I write it and no idea of the end line. It's always satisfying when a thought comes that feels a natural consequence of the previous lines and the end feels like a conclusion, whether at odds or in keeping with the start.

No mention of politics, world affairs, global economics. Intentional or not?

I wanted this collection to have a particular mood like some of my favourite albums. Not a hit singles collection but just good album tracks.

Great question. I always remember that Lowry said “all the art in the world isn't worth a good meat and potato pie” For me, steak and kidney pie with chips. Or if sweet, blackberry and apple pie, I am willing to consider many other pies.

Interview » The poetry of football (2): website has been 'swapping shirts with Shakespeare' for over 20 years

A superb interview. insightful questions. I enjoyed reading that. Thank you.

Great interview, Dave, and review, too. Thanks very much for this.

A splendid gig it was too. Great venue. Really have to thank Henry, Danny Middleton, Paul Neads and Flapjack Press for the organisation and cake.