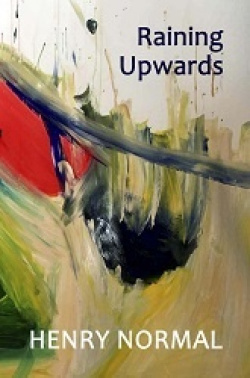 Henry Normal held a large audience in the palm of his hand for a good hour at Manchester City Library last Friday evening. A skilled performer with a ready repertoire of anecdotes and reminiscences, he was accessible and self-effacing, introducing himself individually to most of the audience during the event. This Manchester gig, part of a national tour promoting his new collection, Raining Upwards, was obviously something of a homecoming although he hails from Nottingham and has lived for the past 20 years in Brighton. On several occasions he was reduced to raw emotion in discussing the prodigious talent of Caroline Aherne, the charm of a dying Tony Wilson, the growing process of living with an autistic son, the death of his brother. So how does this make for great or even good poetry?

Henry Normal’s last book (Travelling Second Class Through Hope, Flapjack Press, 2017) was drawn from collections written and published up to 30 years ago. It contains a diverse range of thoughtful poems such as an homage to “least favoured” February, a “corridor month” never sure “how she should be clothed”, and observations from the (late and lamented) Cornerhouse: “Permanently at a crossroads/I glory in my window seat/The goldfish outside …/People with bigger fish to fry/circle the glass/their faces mouthing in silence’. (‘Cornerhouse’)

However, much of the collection articulates very clearly and directly a catalogue of failed relationships. His style is spare, the humour is incidental, not distractive nor deflecting from the pain of failure. The poems are not about fault or blame so much as the conflicting motives, expectations and degrees of commitment, resulting in the tristesse of relationships that have  been built upon “different possibilities” or run their course rather longer than they should have, as in ‘Dopey and Juliet’:

course of a few drinks

Travelling Second Class Through Hope anatomises intimate relationships. Love and its loss are addressed unflinchingly. Breaking up is “forgiving you everything /then nothing every other minute/discounting years in seconds/ … wanting to talk/but wishing too much hadn’t already been said’. (‘Breaking up is …’ )

Unsurprisingly given his track record Henry Normal also has an eye for the absurd, the surreal and the pretentious:

Let’s call a spud a spud

not pommes frites or French fries

Why say ‘haute cuisine’ when you mean smaller portions

Or apropos of the Edinburgh festival:

Welcome to the City of Self

where the body of Christ becomes bread and jam

The beast with a thousand I’s

I leaflet therefore I am

(‘Welcome to the City of Self’)

In Raining Upwards (Flapjack Press 2017) a number of poems relate to a growing awareness of nature, landscape, the sky, to stillness, vulnerability, loss and ageing. Where Travelling Second Class Through Hope is frank about failed relationships, trying (and often failing) to make light of failure and the delusion of solipsistic love, Raining Upwards extols the joy of the moment and awareness of the positive in the present. His brevity and dissection of a scene into a number of discrete and almost insignificant tableaux puts the writer in mind of Raymond Carver or Frank O’Hara.

A boy carries a surfboard bigger than himself

A family re-enact the Olympic games

Surf boy tells his dad the story of his wave

his words crashing over each other

This could be any beach, any month, in any year

If it wasn’t for the couple with a selfie stick

And the man with the e-cigarette

(‘A stream of consciousness meets the ocean’)

With over 100 poems it is difficult to do justice to the range. It is the work of a man with demons transformed by experience, not least in being the father of an autistic boy. The relationship is featured in a number of poems, and influences a number of others. But the poet has discovered the contentment of just being. “Alone with my lad and the waves/we brave the collapse of the cliff edge/A wading fisherman is bullied by the tides .../I am here and consciously alive/We’ve crossed the line between/existence and exaltation/as though commonplace’ (‘There’s more to lemons than being yellow’)

Henry Normal is a man who has good reason to distrust happiness, who seems to feel his life has not been entirely fruitful, his legacy questionable, shouldering the burden of mortality, and the inevitability of decline uneasily.

played on you by your body

beneficial to its survival

An illusion of control

Of the lack of it

(‘Are other animals afraid of their own species?’)

But he has been redeemed by unconditional love, by responsibility, by nature. This collection is beautifully spare, and bitter-sweet. The tenderness of 'Exquisite' abandons that male need to disguise deep feeling through banter or self-deprecation, as in this tribute to his wife:

You choose to open your arms

As though to convert the world

one at a time

Henry Normal managed his set like the seasoned performer he is. A master of timing, funny, vulnerable, self-deprecating, emotional, aware of his audience, unafraid to expose his inner workings. A long, orderly queue formed afterwards for the book signing. Watching him address each buyer personally reinforced my view that the man with his hand on the tiller of new wave British comedy for the last 20 years has found something away from the marbled halls that is real, earthy, genuine. When I asked him what his favourite pie was, in a spirit of giddy irreverence, he came back immediately: “I always remember that Lowry said 'all the art in the world isn't worth a good meat and potato pie’. For me, steak and kidney pie with chips.”