Lives in transit: travellers' tales beside the Betjeman statue at St Pancras 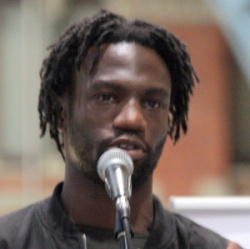 I wasn’t going to write about National Poetry Day  – once it’s gone it’s gone, you might say – but an event staged by arts organisation Poet in the City at St Pancras station early on Thursday evening stopped me in my tracks. Three poets – Belinda Zhawi, Jolade Olusanya, pictured, and JJ Bola – and musician and spoken word artist Basel Zaraa told of lives spent “in transit” in one way or another, the theme of the day’s events at the station.

The evening event took place beside the statue of Sir John Betjeman, England’s treasured poet and the campaigning saviour of St Pancras station, who took on the demolition planners back in the 1960s, and against the background noise of station announcement and Eurostar trains arriving and departing.  Rest assured – the event was fully miced up, and the comings and goings in the rescued, cathedral-like station only added to the atmosphere.

Belinda Zhawi was born in Zimbabwe, and grew up at a time when “western sanctions bowed people’s backs”, before coming to London because her mother told her to. One poem told of being beside the Thames, “how much I loved the water, even though I’d never learned to swim … my reflection looked like an invitation”. Another poem talked of how “this cold island has defaced me”, yet she felt at the same time “like home has forgotten me”.

Jolade Olusanya, who is also a photographer and filmmaker, introduced himself as Yoruba – “I’ve checked, we’re nomads, we’re everywhere” – adding that “we cannot stay still, whether it’s a personal thing or a cultural thing”. His poem ’97 is about going “home” to Nigeria, where he found himself “scared of the sounds of cockroaches and crickets”, although he also “learned how to handle snakes”.

JJ Bola related how he and his Congolese family came to Britain from Kinshasa in the early 1990s: “You are fleeing for your lives … it took 14 years for us to be naturalised as citizens.” He added: “After 20 years I went back to Kinshasa, and stayed at my uncle’s, wanting to know about my roots, culture, stories.” Instead, at a certain time the family all crowded rounded the TV to watch Keeping up with the Kardashians.

Basel Zaraa is a Palestinian refugee, born and brought up in Yarmouk Palestinian camp in Syria. He sang in Arabic, with accompanying English vocals, and even when you couldn’t understand the words, they were urgent, eerie, haunting. He told tales of refugee voyages across the Mediterranean: “It’s down to your luck with the sea … these people have heard so many gunshots, they can no longer feel anything.” His songs began and concluded the event.

One wonders what Betejman, defender of many things English but perhaps less curious about “abroad”, would have thought of all this. A neat juxtaposition by Poet in the City. And always, in the background, there was the music and long, withdrawing roar of the Eurostar trains, exits and entrances, arriving at the platforms and pulling out.

I think JB would have been as curious as he always was.
Numbers of Brits took themselves to other lands in history
and stayed/departed in their turn. It seems wholly
appropriate that their counterparts from those lands
should make their way here to stay/depart in their own turn - and add their experiences to the accounts.