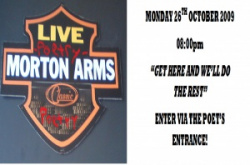 The other night, Wigan’s self-proclaimed Wooden Horse and me went for a ride. Cajoled by a carefully scripted ‘Gig Guide’ feature, we made our way to an event that stated in no uncertain terms - ‘we welcome visitors from afar…’ Just HOW far I suppose is open to interpretation. In our case it was 17 stops on two of the slowest moving trains in the Northern hemisphere. A distance of approximately 30 miles. Would this be considered ‘afar’ enough by our unsuspecting hosts?

Moreton is located on the Wirral Peninsula, an area which collectively is championed as ‘the land that time forgot’. Up until last night - I’d never even heard of the place - but once I had - the first thing that came into my mind was that it sounded remarkably like Tolkien‘s ‘Mordor’. I was more than hopeful that this was where the similarity began before quickly ending, and yet as our train began slowing to a halt it seemed that Moreton made Mordor look like Fantasy Island. This was going to be ‘a tester’.

The Morton Arms IS located a short walk from the train station. It’s impossible to miss. The building itself is not only the size of the Royal Albert Hall, it’s illuminated with enough neon-light to attract any misguided travellers who think they’re heading towards Blackpool and its over-rated illuminations. But that’s one thing about Merseyside and the Wirral. Their pubs are usually five times the size of their libraries - for reasons that were to become ‘Oh, so clear’…

Inaugural poetry events are often ‘hit and miss’. Arriving inexplicably premature, John Togher and me were allowed the luxury of seeing the venue without its clothes on, as it were. Much more than spacious, it had a working class charm that we’re both reassuringly familiar with. After 30 minutes or so of acclimatising dialectically, we were in a position where we could communicate with the loquacious locals. Things were definitely on the up.

Shepherded into the pub’s sizeable Lounge, we were allowed the luxury of a huge choice of seats and mingled uncomfortably with inanimate tables and chairs while making phatic conversation with other equally uncomfortable looking event organisers. It felt awkward but nothing mild sedation wouldn’t tolerate.

Then, all of a sudden, what looked like a coach party arrived, and the room filled with effervescent, colourful arty people. After which, a constant stream of The Wirral’s finest and most celebrated poets gathered en masse and jockeyed for prime positional performance space. In between this bump and jostle, the odd musician crept inside and leopard crawled their way into one of the room’s four corners. Only to later draw attention to themselves by mauling with their frets and doing something loosely associated with ‘tuning up’. Musicians? I’d boil ‘em in octaves.
Finally, and at last, the poetry…

Liam Brayd was arguably the event’s largest poetic Pike. So much so that he was expected to give a ‘Masterclass’ by explaining just HOW exactly he arrives at his completed work?
‘BooOOooOOoo - HiSSSssSSSSss’. Personally, I didn’t want to know. I just wanted to marvel in his surrealism. Although to be fair, he looked as uncomfortable with trying to explain how his inspiration manifests itself as I was with the rising room temperature. He read several classics from his latest collection of poems ‘Two Fish’, and left the audience of poetic peers looking both bemused and entertained in equal measure. I now have a signed copy of his latest work that takes pride of place in my aquarium. A great performing talent.

To be fair, there were lots of good performances. One or two brief and witty ditties and just the odd few pieces that linguistically were a huge steaming pile of averageness. Performance wise, each and everyone of the contributors put their hearts and soles of their boots into it. The list would be far too long and time consuming, but it was definitely a ‘who’s who’ of The Wirral poetry scene. Featuring - to name but a few - and in no particular order of personal preference -Write Out Loud members - John Togher, Steve Smith, Steve Regan, Chris Co, Claire Kirwin, Malpoet….of course, there were many others including the much maligned musicians to add to the mix.

However, for me, what began to bind the night together was the sense of camaraderie although it wasn’t an ALL inclusive night. Socially inept people like myself always struggle to ‘circulate’. At first, I felt like I’d ‘gate-crashed’ a complete stranger’s social function. An Uncle Tommy’s 70th birthday bash type of do. The buffet was skilfully spread and displayed in a ‘just help yourself’ style under dimmed (some would say - intimate lighting) and people WERE - helping themselves. Mingling at the interval, it was obvious that those people who were already familiar with each other were considering the night a success. Indeed it was - a HUGE success.

Music. Poetry. Food. Comedy. Even the odd Sea Shanty. What more could the weary travellers ask for? Well, just perhaps a decent Wirral taxi service that got you back into Liverpool in time for that last slow train home.

Good job I had with me a Wooden Horse.

◄ A Tree With a Thousand Wings by Harish Meenashru