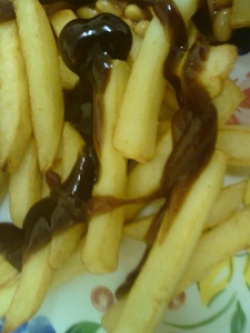 For reasons even I can’t explain - some things are just meant to go together. Laurel and Hardy. Morecombe and Wise. Beans and Toast. This list is long. Perhaps, too long - but nowhere on it would you have found ‘Poets and…Chips’ - until that is - last night.

Bolton’s Rugby Union Club was the rather bizarre setting for Andy ‘N’s organised contribution to the North West poetry scene. Showcasing not just any old threadbare poet/performer, but, and I quote ‘The North West’s MOST exciting poets…’ and if this claim wasn’t bold enough, to initiate the salivation of any parched poetic lips - then the second barrel of persuasion was blasted at you in the shape of free food. In this month’s case - Chips. Hence the constantly morphing title of his now regualr poetry event. Apparently.

Think Phoenix Nights. Peter Kay’s famed contribution to British television comedy - or, to be more precise, think the end credits to Phoenix Nights. Where the committee members are auditioning a variety of novelty acts. Acts that belong, at best, in ‘Clubland’ and at their worst inside the confines of a dimly lit bedroom. Either way - the auditions were often brought to an untimely end with the woeful cry of - ‘NEXT!’

The paying members of last night’s audience were not allowed this luxury. Had they been - then the evening may well have finished before the first chip had been fried and served. As it was - the audience were expected to sit themselves down and simply ‘enjoy’.

In order to facilitate this request, I turned the venue into The Phoenix Club, with a little help from my own poetic license and much maligned  imagination. Not too much. The décor of the Rugby Club is practically the same as The Phoenix. All it’s short of is its ‘Indoor Golf’, ‘Foxy Boxing’ and a ‘Six foot Kerplunk’.

Jefferama was our very own ‘Jerry St. Claire’ the evening’s compére and although Jeffo’ wasn’t wearing a white suit, he was accompanied with the occasional sound of a low-quality electronic organ just to reinforce the authenticity of a Les Alanos sound experience. Even, at one early stage, prompting me to pinch myself, for fear that I hadn’t  actually drifted off into the realms of rapid eye movement and was dreaming my experience. No. I was awake. This was going to be brilliant.

Andy ‘N’ (pronounced - Enn) was not only the event’s organiser. He read poetry. Poetry themed around - Chips. What else? He stopped short of disclosing his intimate fetish and what he likes ‘doing’ with chips but at this point I imagined Peter Kay’s  ‘Brian Potter’ character shouting ‘NEXT!’

It seemed to work because Andy finished his first poem and introduced us to ‘Gary’. Now this bit - I’m really NOT making up…
Gary felt the need to give the audience a Health & Safety briefing. ‘In the unlikely event of a fire…’ - that type of thing. Now, I’m well aware of litigation and the responsibilities placed upon event organisers, but I never expected a ‘Keith Lard’ character to speak passionately about ‘fire’ and ‘smoke’. I questioned the size of the deep-fat fryers being used to cook the famed chips and felt myself looking instinctively over my shoulder toward the kitchen area. From where I was sitting, the kitchen staff seemed more than capable of frying MOST inanimate objects. However, I made a mental note of just where exactly the fire escapes were located. Then I relaxed. Sort of.

Rob Goodier is a Bolton lad. A regular on the NW poetry scene. He’s a talented man and has appeared on television with the shiny Des O’ Connor. Local radio. Amateur dramatic productions. His list of credits is long. He does however, struggle with the concept of time. ‘5 minute slots’ tells me - without approximation - that each artist’s slot is  - 5 minutes. One of Rob’s poems felt like 5 minutes and he read a few, before finishing on ‘Strangulation’ which is a mongrel of a poem that uses The Stranglers song and album titles to flesh out its bones. It makes little or no real sense. He performs it with an enthusiasm that involves both hyper-correction and facial animation. A face better suited to radio - as they say - but, as always, entertaining.

'JP’, a poet who I’ve never seen before, fumbled his way onto the stage area with a glamorous female assistant. I was intrigued. This actually felt like a real Clubland audition. My eyes flicked around the other audience members whose facial expressions ranged from bemused furrowed brows to vacant stares (some toward the fire escapes) and as my eyes returned back toward the stage area, I imagined the audience shouting a collective ‘NEXT!’

However, patience is indeed a virtue.  Ours was rewarded with continued fumbling. A rambling introduction. And more collective bewilderment. Personally, I wouldn’t find the job of holding a sheet of paper in front of my loquacious partner, while they simply read aloud, any more rewarding than I would watching them take a sheet. What added to the puzzlement was that she was standing immediately next to a music stand. Was this part of the act?
The poet ‘JP’ was OK. He read a piece about Southport Beach and another that contained  phrases such as ‘The man who sneezed Butterflies’ (for some reason - I imagined Butterbeans) and ‘choke on broken smoke’. Initially, I thought this was a subliminal reference to ‘fire’ and ‘smoke’ just to keep the audience on their emergency-drilled toes. Alas, no.
‘Fall up to space’ was another phrase, and I suppose taken out of context it makes as much sense as it did last night to somebody who was drinking as heavily as a night involving chips would allow. NEXT!

Every pantomime has its villain. And while the night fell a long way short of becoming a shouting match of ‘he’s behind you - oh no he isn’t’ type farce, our villain, for literary effect, was John Darwin - or was it John Togher? They can BOTH be our villain.

JD’s poetry is intense. It’s deep. It has more layers than the deepest-fried onion. It didn’t belong here, any more than a Rugby club belongs in Bolton. NEXT!

JT read his poem that features the line ‘sticking my penis into your ear-canal’. It goes without saying that this lightened the mood or at the very least brought the mood back on track. ‘Get back ya’ bastard - or I’ll break ya’ legs’.

James Burn is a new poet/performer to me. So new - that may not even be his name? That’s what it sounded like through the distorted sound. He performed a poem about ‘Mexico’ and one titled ‘Writing a Bad Poem’. Out of those who I watched and listened to, he has the potential to be a very good performance poet. In some circles he probably is already. However, I felt that he didn’t engage the audience as much as he could have done or as much as his confident manner would allow. He was good - but could have been better.

Other performers included ‘Affie’. She wanted to be a Vampire and read a piece that was sensual and reinforced her wanting. Me? I wanted chips - and plenty of ’em. Instead, I got Allan Gray who still gets introduced as Gordon Zola - why not compromise Allan and call yourself ‘Gallon Zolay’? The eight-pint wonder of the world?

Gus Jonnson and Janet Ramsden each performed but at this point, I was abducted by a bunch of gang members from a rival club called ‘The Banana Grove’ . They forced me at Butter-knife point to smoke and drink outside. Imagine my disappointment to discover that there were no ‘Paddy’ and ‘Max’ type characters standing outside. ‘Nice legs - what time do they open’? kind of mentality. That’s when it struck me. This wasn’t The Phoenix. This was Andy Nic’s. Andy N’s night.

The lad had tried hard. Potentially, it could be a very good night. The venue, for all its faults, isn’t THAT bad. In fact, it kind of adds to the charm of the event. I half expected the venue to be filled with drunken Jackasses. I really hoped that it was - I would have fitted in seamlessly. The sound system - if a can call it that - was perhaps too temperamental. In truth - it wasn’t required. The audience were practically sitting on the stage. Some performers enjoyed their time in the spotlight. And while the verb ‘hogging’ comes to mind, I suppose it was allowed to help pad out the amount of poets who actually DID perform and wallow in the chip-fat of self-indulgence.

A rather bizarre notion was the playing of Antonionionionionionioninonioni’s CD. Bizarre, because he wasn’t even present. I imagined if we’d all sent CD’s of ourselves into Andy and asked would he mind awfully, playing the first 3 poems of, say, CD 1? The chip consumption would fall drastically and I would want to know if there was still a requirement that I pay my pound?

Maybe next time - cos I’m sure there WILL be a next time - the Health and Safety briefing can be pre-recorded onto CD? That way, audio FX can be added and the sound of mass hysteria can be piped at regular intervals to remind us of the dangers of performance poetry?
As I was leaving, I couldn’t help but leave a small memento of my visit. With painstaking patience, I inserted  the real star of the show into an empty Guinness receptacle. My very own ‘Chip in a bottle’.