A Tree With a Thousand Wings by Harish Meenashru 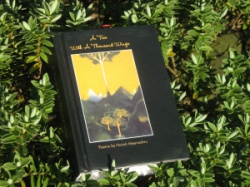 The first thing to say about this book is that it’s beautiful; I’m used to reading slim volumes of verse that all, no matter how good or indifferent the content is, tend to look the same. ‘A Tree with a Thousand Wings’ is gorgeously small like a pocket diary, hardbacked and presented in a slipcase; it feels like something you want to treasure, to return to again and again as its wisdom seeps into you over the years.

The poems are like the presentation; beautiful, memorable, different. Meenashru is described in the introduction to the book as one of the ‘major voices of post modern Gujarati poetry’ and, although they stand as poems in their own right, have to be read in the context of the poet’s journey towards self-realisation. There’s spirituality here, of an unashamed and obvious kind that you don’t often get in Western writing, and as a result, on first reading the poems can seem at once almost too rich and almost too simple, and that’s why you have to take your time with them.

Here’s ‘Love Hymn 26’: ‘Never have I understood the love of a river//Water’s incessant touch/and its obstinacy to flow afar in separation/forever leaving me behind//all alone//how do I hear this moment/where deception of perpetual union/drifts me away into the connotation/of eternal pangs of separation//Stationary I am. Migratory you are//In the ceaseless touch/your love proves/the theorem of immeasurable distance/ever increasing between us.’   Now, the first thing to say about this is that it’s a translation; I can’t read the language it comes from, but it faces me from the other side of the page and I’m entranced by the beauty of it and the way that it looks like a language built for poetry and built for love. The English is good, but it feels like a photograph of a sunset rather than the sunset itself, but the photograph is all I’ve got. So I take a line at a time and I spend a long time with it: ‘Never have I understood the love of a river’, is a lovely line; I don’t quite understand it, but I feel the river flow as I try to take it in. Is it the river that is being loved, or is the river the one doing the loving?  The ambiguity is part of the language, and maybe it’s part of the translation. The idea of the river always moving, perhaps never being the same river, is captured beautifully in ‘Stationary I am. Migratory you are.’ And the poem ends with the river flowing away from the reader.

Many of the poems in the book are like that: they’re ambiguous, and to focus them too much would be to lose the mystery that they’re full of. Lines like ‘in this garden/the unhanging apple’s wounds/are now getting healed’  or ‘when/the quiet midnight gets disturbed/even with the gestures like moon or moonlight’ resonate like bells. I don’t know if I’m missing cultural references, and I don’t know if what I’m enjoying is partly the fizz and dislocation created by reading poems in translation, but these poems, will stay in my mind for a long time like music heard from another room.