Things I Will Put in my Mother's Pocket: Catherine Graham, Indigo Dreams 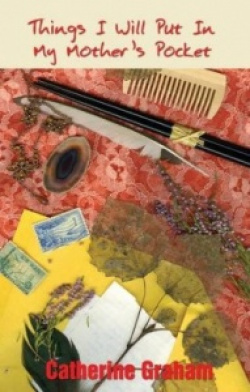 This collection by Newcastle-based poet Catherine Graham begins strongly. In ‘Making Marmalade with Marc Bolan’ the free verse form employed particularly suits the whimsical, yet coherent narrative.  It is a confident, compact poem, light on its feet with an unforced sub-text (which the reader is likely to infer as sexual).  Equally strong are ‘Signs’, which takes the form of a simple narrative but which develops via images which seem to be semi-detached from the narrative but whose main function is to create atmosphere, and ‘I’m Not Struck on Her Upstairs’ where the narrator’s envy nicely bubbles to the surface at the end.

Striking a different, much less whimsical note are ‘Making Clogs at Gallowgate’, ‘Blossom’, ‘Ukelele Nights at the Cumberland Arms, Byker’, ‘Band of Hope’ ‘The Fever Van’ and ‘Industrial Panorama’ (the latter two also responses to paintings by Lowry).  These are vivid pictures of working class life and personal experience in the north-east of England.  Compared with the poems mentioned above, these poems make somewhat heavy weather of it.   It may be that there are too many details piled up; they could do with something to leaven the mix.

‘Hyem’ is also tied to place and personal experience but its texture is lighter, its language more suggestive, the details deployed more sparingly; and ‘Daughters of Tyne’ creates place, time and circumstance via deft narrative rather than accumulated detail.   ‘The Hoppings Comes to Town Moor’ is at once of these poems and something more.  Included in the mix - a colourful evocation of a fair – is an understated compassion for the elderly, unmarried ‘Aunt Edie’.

‘Sister’ is one of a number of successful “personal experience” poems.  Here, happy memories morph into an implied family tragedy hinging on the subtle change from “are” to “were”, while the contrast between “neat pairs” and “strewn” in the penultimate stanza guide the reader but provide space for development of his or her own response.  The juxtaposition of this poem and ‘Only Child’ is peculiarly powerful.   Similarly, ‘Cutting My Father’s Hair’ is at once intimate and unsentimental and ‘Last Waltz’ carries its burden of emotion lightly.

One group of poems is less successful:  ‘When the Ship Sails Up Dean Street’ is polemical, the poetic form seems forced and the argument unoriginal and simplistic.  In ‘Sticks and Stones’ there is little place for a line like “speak out against injustice, inaction, poverty”.  A poem needs to have its reader feel injustice etc, not be told what to feel.

While Graham mostly employs free verse, she makes good occasional use of   other forms.  ‘She Wishes for a Poem by Yuri Zhivago’ utilises the villanelle form to good effect to create an obsessed, lovelorn narrator.  ‘The Librarian‘ has an understated rhyme scheme which supports the serio-comic tone.   ‘Extract Taken from Poetry and the Menopause’ is a prose poem which works by creating an illusion of “foundness”.  ‘Letter to Steve Wright’s Sunday Love Songs’ sits somewhere between prose and poem, a location which dramatises the suppressed anger of the narrator.

There are some impressive moments in these poems. I have already mentioned the subtleties of ‘Sister’.  In ‘Only Child’, that the child ‘must wait/ for elderly relatives to play a board game’ is highly effective in generating a response in the reader.  John Lennon, whose language seems to be exactly captured, comes to life in ‘Poem for John Lennon’: ‘This isn’t going to be some sentimental timeline, is it?/ Some kind of spot the song title crap.”

One weakness in some of the poems is a tendency for there to be too many words, not leaving enough space for the reader to move around in.  In ‘Letter to Steve Wright’s Sunday Love Songs’, an otherwise successful poem,  “12 months ago” is unnecessary explanation, spoiling the effect of the clever “given me the best year of my life”, and the reader gets that “sex was mediocre” without being told so.  There is also a sprinkling of clichés and overworked words. “Bittersweet” in ‘Making Marmalade …’ and in ‘Black Bullets and Vinegar’ is one whose accuracy is not enough to de-cliché it.  The word “smile” is perhaps used rather often.

The title suggests a theme for the poems which turns out to be important but not exclusively so, and there is sufficient variation in the poems’ shape and texture to raise question marks about cohesiveness.  Some poems could do with a little more editing and a lightening of texture, and there are one or two that do not deserve a place. Nevertheless, it’s an attractive collection with some outstanding poems, and one that provides a strong flavour of the north-east.

Catherine Graham. Things I Will Put in My Mother’s Pocket, Indigo Dreams, £10.25