Find out more about the Milestones winners - and their poems 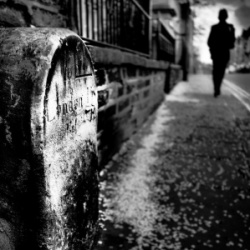 Milestones poetry competition winner John Baylis Post’s poems have been published in Ireland, England, France, and Italy, and he was judged Canterbury Poet of the Year 2014.  He now helps to run Hungry Hill Writing's competitions and publications.  Selected poems and some other writing, together with his fine art prints and photographs, can be found at www.johnbaylispost.com.

Under-16 section winner Martha Blue says: “The idea behind my poem was really two of my own poems that became one linked by this theme Turning Point in my life, which was realising that I am always looking closely at things. I have written a lot of articles and poetry which has been published in the junior magazine for TARS (The Arthur Ransome Society). I am now a co- editor of this magazine!”

Runner-up in the open section with his poem ‘Cavalry Cemetery, Romania’, Stephen Devereux grew up in a small town in Suffolk. After leaving a “terrifying” secondary modern school with three CSEs he worked on farms, in factories, textile mills - whatever paid the bills. After completing an A-level course at a further education college, he continued to work in manual jobs until taking a degree at the University of East Anglia as a mature student. He trained as a teacher in Manchester and taught in sixth-form colleges, schools and at Liverpool Hope University. He lives and works in Liverpool. He writes about both the Suffolk coast and the urban landscapes of the north-west and its characters. He has won or been shortlisted in many competitions, including runner-up for the Ted Hughes poetry prize, and has had poems published in magazines/journals/websites in the UK, US, Ireland, Austria, Germany and Australia. He also writes short stories, essays and drama. He has recently completed a collection based on disintegrating second world war concrete defences along the Suffolk coast in collaboration with the artist Peter Wylie whose etchings/prints depict the landscape described in the poems.

We came across it not looking for anything

much beyond the battered tower blocks and

empty shops, but a few miles out of the city,

across meadows of poppies and cranesbills

in the corner of an ordinary field under the

round thirty or so whiter gravestones, each with a

photo or engraving placed in an oval glass plaque.

Who were they, we wondered, what lost

skirmish had left them in this pretty corner,

the sunlight playing on their sepia faces through

the heart-shaped leaves.  Had they died for love

of this place or were they chased here to die

of sabre blows, never to know the name of

this glade that holds their young bones? And

who was it that kept them so clean, repaired

the little plaques, straightened them up so that their

Only the word ‘Călăraşi’ on each headstone gave

them away. And they looked too smart, too

romantically fatal to be anything else but cavalry.

Thirty three.  We counted them.  The dead of more

recent wars were thrown in pits, unrecorded. The

nibbled by fish. They do not signify. So why are these

strew beneath the plaques that hold their likenesses?

The dead of the Somme too numerous to count beneath

uniform headstones numb to silence the tourists and

school parties with their weight of numbers, their vast calamity.

The thirty three look out, still, from under their busbies,

too young for their epaulettes, no older than the girls

who must bring them flowers, still. 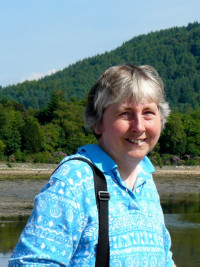 Caroline Gill, pictured, who came third with her poem ‘Penwith Finger Stone’, was overall winner in the Zoological Society of London poetry competition (2014). Her poem, ‘Elegy for Idris Davies’, was nominated for a Pushcart prize in 2014. Her chapbook, The Holy Place, co-authored with John Dotson, was commissioned and published in 2012 by Peter Thabit Jones of The Seventh Quarry (Wales), in conjunction with Stanley H Barkan of Cross-Cultural Communications (New York). Three of Caroline’s poems were included in The Book of Forms, A Handbook of Poetics Including Odd and Invented Forms by Lewis Putnam Turco (University Press of New England, 2011). Other poems have been published in the UK, US, Romania, India and Australia. Caroline is married to David Gill, professor of archaeological heritage at the University of Suffolk, and is an active member of Suffolk Poetry Society. Her website is here.

and Gurnard’s Head ripple off the tongue,

raining their music on this granite land.

I tilt my neck and watch the sky display

its spectral colours as the clouds recede:

two farm dogs scamper up the hill. I walk

towards the finger stone, which hides

between the tarmac and a Cornish hedge:

a snail trail shimmers in the afternoon.

I check the surface of the milestone block.

and over to the arc around Mount’s Bay.

This ‘stone with benchmark’ sends me on

to find a town called ‘ƧTIVƧ’, without an ‘e’

in Ives. Each ‘S’ is back to front: was this

through lack of learning? It could be

the maker was left-handed for when I

was small and shaping letters into words,

my text ran right to left, which seemed

its natural ebb and flow. I filled the pages

of my stapled book, flicking from the back,

until convention’s channels turned the tide.

My current ‘S’ advances in a coil of surf,

unlike these stone-based characters,

which chime when rain comes pelting