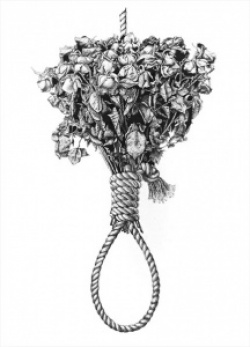 An Idola, who deserves the persecution that comes with
the eyes of a hungry audience.

The Lion greedily roars, depraved in hunger and gifted with I, the sacrafice.
Big Top mentality, the bigger the crowd the thirstier for bile, that drips into the cotton candy machine.

I have crossed my eyes with x's, until I could be accused of a clown's facade.

I deserve this, with the roar of the spectators as above me the acrobats dance their ballerina performance.

I can hear the Calliope roll through the circle
Spinning in a sort of
Tootle-Toot song.
Unfitting for such a scene, however I do not deserve an orchestra.

Sinful Idol of a society's circus that breaks my breath with the crushing rope gasp of the lion's jaw that hangs me from the tight rope.

thanks for taking the time to reply Connor - it's always good to hear some background. I don't know why but I think a lot of people think about suicide but thankfully very few actually carry it through.

Enjoyed your reading btw. Look forward to your next offering. Take it easy - have a nice weekend. Col.

Hey there Colin, always glad to see your comments on my stuff!

So really what I wanted to go for in this poem was discussing this feeling that I went through during darker periods in my life.

I used to feel like my suffering and pain was a show for everyone to enjoy, as if hurting me and making me feel bad entertainment, and suicide would be the final act. I used to even think I deserved it because of how deep into a hole I was.

I chose the title Ringling Brothers because of the connotation that they've been 'dead' for quite a few years now, as are my feelings on that topic.

I ope that I might've cleared some stuff up!

Hi Connor, I'm intrigued, can't quite pin this down. I think maybe the title is throwing me because Ringling Bros closed down a few months back yet there is this suicide theme which I'm trying also to connect. I like the poem, the subject matter is different and that in itself will always attract me like a moth to light.

I have to say I have never been a lover of circuses especially those that 'train' and perform animals. With dwindling audience numbers and a society less accepting of these acts of 'entertainment' perhaps the noose was gripping evermore tighter around the Ringling/Barnum neck. Am I getting closer? I wish the same for SeaWorld and other aqua prisons. Empty the tanks. I hate to see animals held captive and (ab)used for financial gain.

thanks for posting and piquing my interest.
Col.