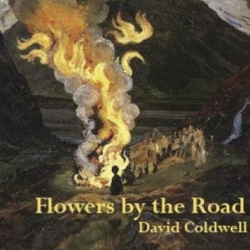 David Coldwell resides in the West Yorkshire Pennines, and at the heart of this pamphlet is an elemental, almost mystical relationship with landscape. The lines in the poems are long and conversational in style, but deeper meanings lie beneath their surface.

The image of a still reservoir comes to mind, prompted perhaps by such poems as ‘The Cat Stone Cast’, where the long line seems to reflect the arc of the fishing line that inadvertently inflicts injury. The Cat Stone is no longer there, casting doubt on memories and the past. “The reel jammed and the line tightened to / drag me towards water, towards the pike …  Nurses joked about a frayed face but didn’t wait for the laugh.” This is a poem about old wounds and scars.

And just because pike are mentioned, a reviewer should not cry: “Ah, Ted Hughes!”. However, on the strength of this poem at least, Coldwell can count himself among the heirs of the brooding son of Mytholmroyd. That Hughes legacy is also apparent in ‘The Small Hours’, where the opening line, “All night the sea has conspired with land” recalls that well-known beginning of ‘Wind’ by Hughes (“This house has been far out at sea all night”).

Coldwell is a painter as well as a poet. ‘Perfect Green Windows’ reveals an artist’s eye in its detail and observation, with its weak final line just a minor disappointment. The sensual delights of art are celebrated in ‘Late September’: “Maria passed me an apple and asked me to imagine / its core and the taste of its flesh. // Her dress shone like neon in the light.”

The biographical information in this pamphlet reveals only that the poet works in “the public services”, but his poems give away clues as to what that public service entails:

We have searched every inch of this town, every single dead end

cul-de-sac, and known alley way. My legs ache with blood

and the pulse of the engine.

the counter with a coin spinning on heads

that she pockets with a phone,

a half smoked cig and a split bus pass

The title poem suggests that Coldwell gets to see too many flowers by the road, left at the scene of fatal accidents, in his line of work: “Perhaps we should build a memorial and collect / all the dying flowers left at the side of the road / to burn them on the greatest fire our world / has ever seen or known.”

His relationship with the moors and the Pennine watershed includes the knowledge of what they were before, and of what they might become:

in its bed, realigning itself with a future place.

You retrace each step, walk for miles on the moor,

In ‘The Moor’ he senses ghosts as well as the “far off blue of the reservoir”, and the sounds of curlew and grouse. There is a delight in the belief that “there has never been anyone here,” yet beyond this emptiness miles inland, “I swear I can taste the sea, / smell the squall of ocean storms.”

Coldwell's magical sense of landscape is exemplified in the remarkable long poem 'Snow', which describes how weather can transform some parts of England into different worlds: "We give in and watch the snow fall. / We watch the village slowly fade from sight." Eventually "the people hunker down / in make shift shelters where we listen to the sound / of our breathing amidst the cries of wolves". This elegaic/apocalyptic mood continues in 'The Drowned Village', where "empty farmsteads that once dipped their / toes at the water's edge no longer exist".

There is a generosity to Coldwell’s long lines, even if occasionally one or two would benefit from greater economy. They are accommodated within the square format of this excellently-produced edition; and they suggest to me the way thoughts arrive as you walk, encompassing and matching the poet’s stride as he heads off once more to find inspiration on the moors.